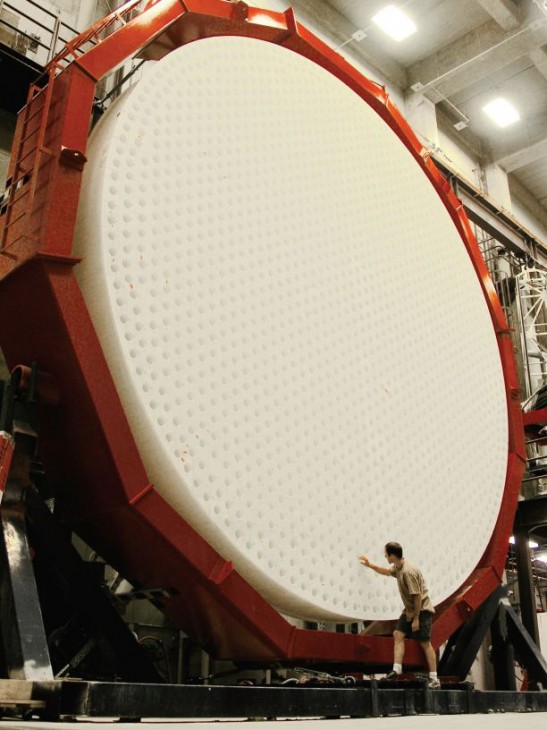 The first of seven mirrors for the Giant Magellan Telescope after removal from the furnace. The back surface of the mirror is shown here during an inspection of the holes used to ventilate the mirror during operation in the telescope. (Photo: Ray Bertram/UA)

Scientists at the University of Arizona and in California have completed the most challenging large astronomical mirror ever made. For the past several years, a group of optical scientists and engineers working at the Steward Observatory Mirror Laboratory underneath the University of Arizona’s football stadium have been polishing an 8.4-meter (27 ½ feet) diameter mirror with an unusual, highly asymmetric shape.

By the standards used by optical scientists, the “degree of difficulty” for this mirror is 10 times that of any previous large telescope mirror. The mirror surface matches the desired prescription to a precision of 19 nanometers – so smooth that if it were the size of the continental U.S., the highest mountains would be little more than a half-inch high. 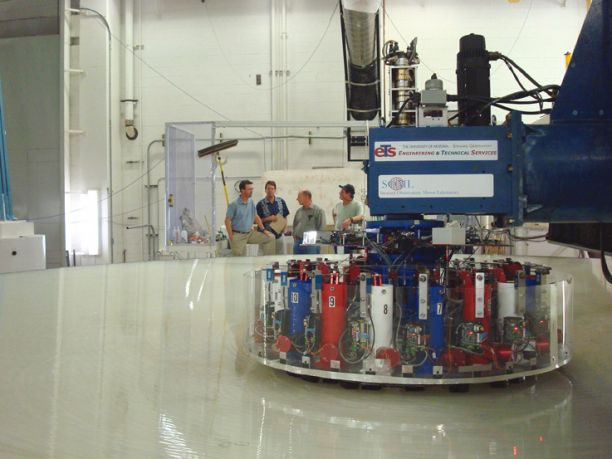 The first of seven mirrors for the Giant Magellan Telescope being polished at the UA Steward Observatory Mirror Laboratory. The polishing head, shown center, changes shape to match the curvature of the mirror as it moves across the surface. (Photo: Ray Bertram/UA)

This mirror, and six more like it, will form the heart of the 25-meter Giant Magellan Telescope, providing more than 380 square meters, or 4,000 square feet, of light-collecting area. The Giant Magellan Telescope will lead a next generation of giant telescopes that will explore planets around other stars and the formation of stars, galaxies and black holes in the early universe. GMT partner institutions include the Australian National University, Astronomy Australia Limited, the Carnegie Institution for Science, Harvard University, the Korea Astronomy and Space Science Institute, the Smithsonian Institution, Texas A&M University, the University of Arizona, the University of Chicago and the University of Texas at Austin.

The mirror was cast at the mirror lab from 20 tons of glass, melted in a rotating furnace until it flowed into a honeycomb mold. Once the glass had cooled and the mold material was removed, scientists at the lab used a series of fine abrasives to polish the mirror, checking its figure regularly using a number of precision optical tests.
The mirror has an unconventional shape because it is part of what ultimately will be a single 25-meter (82 feet) optical surface composed of seven circular segments, each 8.4 meters (27 ½ feet) in diameter.

The Giant Magellan Telescope will be located on a remote mountaintop in the Chilean Andes where the skies are clear and dark, far from any sources of light pollution. At the Carnegie Institution for Science’s Las Campanas Observatory in northern Chile, earthmovers are completing the removal of 4 million cubic feet of rock to produce a flat platform for the telescope and its supporting buildings.

The telescope, slated to begin operations late in the decade, will allow astronomers and students across the U.S. and from around the world to address critical questions in cosmology, astrophysics and planetary science.–Source: University of Arizona