Most of the more than 6,000 species of frogs in the world lay their eggs in water. But many tropical frogs lay their eggs out of water. This behavior protects the eggs from aquatic predators, such as fish and tadpoles, but also increases their risk of drying out. Justin Touchon, post-doctoral fellow at the Smithsonian Tropical Research Institute, discovered that climate change in Panama may be altering frogs’ course of evolution. 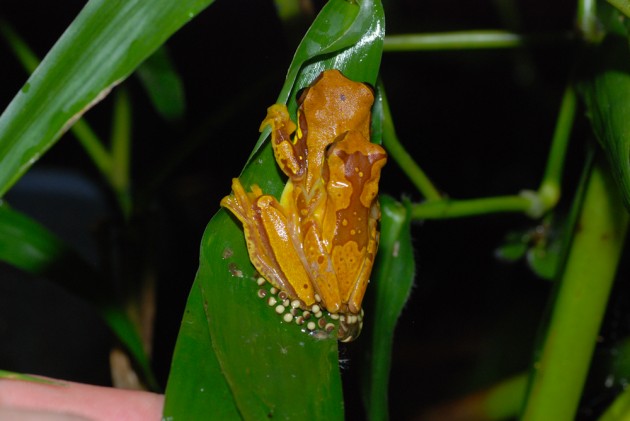 Pantless tree frogs, Dendropsophus ebraccatus, in amplexus. The female, underneath the male, is laying eggs in a jelly-like matrix. This species can lay its eggs either in water or out of water. (Photos by Justin Touchon)

“Over the past four decades, rainfall has become more sporadic during the wet season,” said Touchon. “The number of rainy days decreased, and the number of gaps between storms increased.” 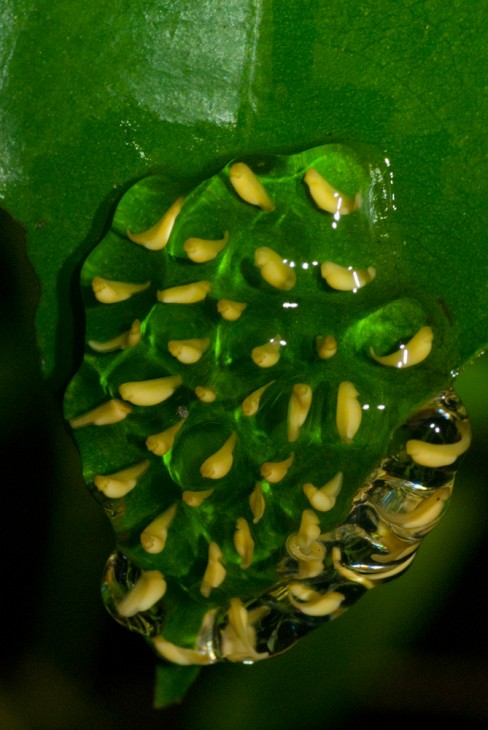 Pantless tree frog embryos within the eggs on a leaf surface.  The embryos die within a day if there is no rain to moisten the egg mass.

The eggs of the pantless treefrog, Dendropsophus ebraccatus, are extremely susceptible to drying. The embryos die within a day when there is no rain. Heavy rains trigger breeding, so as storms become sporadic, the chance of rain within a day of being laid decrease and so does egg survival.

As weather patterns have changed, the advantage of laying eggs out of water has decreased, not only for pantless treefrogs but potentially for many species. “Pantless treefrogs can switch between laying eggs in water or on leaves, so they may weather the changes we are seeing in rainfall better than other species that have lost the ability to lay eggs in water,” said Touchon. “Being flexible in where they put their eggs gives them more options and allows them to make decisions in a given habitat that will increase the survival of their offspring.”