A story of creation is unfolding in the Amazonia exhibit at the Smithsonian’s National Zoo and it involves a mammoth amount of attention and loving care by one of the Amazon’s smallest amphibians. For the first time in its history, the National Zoo has bred strawberry dart frogs (Oophaga pumilio), which are known primarily for their vibrant colors and poisonous skin. These frogs also stand out among others because of their dedication to their young as they undergo metamorphosis from egg to tadpole to frog. 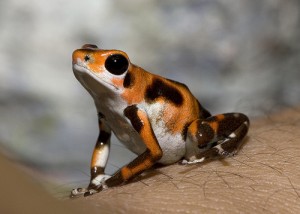 Photo: A strawberry dart frog at the National Zoo

“Most frogs put out a tremendous amount of eggs, let them go and see what happens. The tadpoles swim off and there’s no one looking after them,” said keeper Justin Graves. “But not these guys. These guys are sticking around. Because the females only lay a few eggs, they put a greater amount of care and energy into looking after them.”

The strawberry dart frog’s reproductive process starts in thick foliage close to the ground, where the female lays about six eggs—each no bigger than a pea—in a moist place after mating. For about the next 10 days, the male frog will protect and water the clutch by emptying his bladder on it. When the eggs hatch, the female carries each tadpole on her back, one at a time, up the side of a tree in search of a small pool of water, less than a thimble’s worth, where she can deposit them. This can be a tree cavity, but many frogs use pools in bromeliad plants, which often grow high up on trees.

For the strawberry dart frogs at the National Zoo, finding such a nursery usually means a journey of about two feet up to the clusters of bromeliads in the Amazonia terrarium where they live. But researchers have witnessed frogs in the wild carry a tadpole nearly 40 feet—a trek that takes about an hour. Each tadpole gets its own pool, increasing the chance that at least a few of them will survive to become frogs. 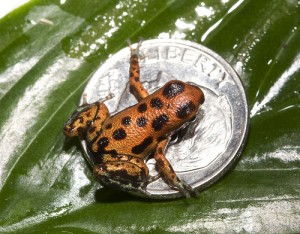 Photo: Strawberry dart frogs are among the Amazon’s smallest amphibians, growing to be no larger than the diameter of a quarter (compared to a dime here).

This entire process distinguishes these frogs from other species, such as the female American bullfrog, which can lay as many as 20,000 eggs and then abandons them.

Strawberry dart frogs are one of more than 100 species of poison dart frog and live primarily in the rainforests of Central and South America. Though not endangered, habitat loss and a disease known as amphibian chytrid fungus continue to reduce their numbers. Their natural predators include birds, reptiles and other amphibians. 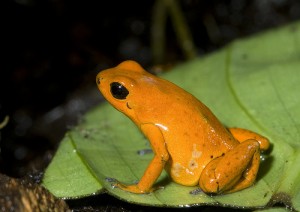 Photo: An orange strawberry dart frog at the National Zoo.

Adult strawberry dart frogs get no bigger than the diameter of a quarter and can be one of 30 different color variations. The Zoo’s frogs primarily eat crickets, but in the wild they eat ants, beetles and other invertebrates, which give them their toxins. The Zoo’s strawberry dart frogs, which arrived this fall, share a home in a beautiful four-foot hexagonal terrarium with glass and lemur frogs, which have also successfully bred recently for the first time in the Zoo’s history.