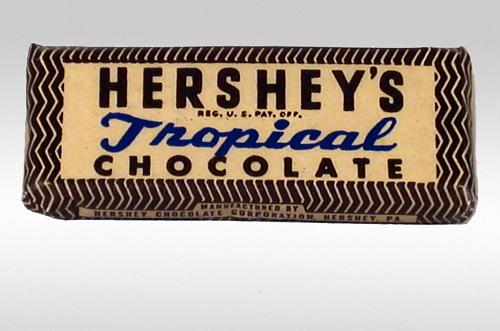 In 1894, Hershey founded the Hershey Chocolate Co. and produced the first Hershey chocolate bar in 1900.

In 1905, Hershey opened the world’s largest chocolate manufacturing plant in Pennsylvania, about 30 miles outside Lancaster. The factory was located in the center of dairy farmland where Hershey had access to the large supplies of fresh milk needed to produce fine milk chocolate. Hershey’s milk chocolate quickly became the first nationally marketed candy in the U.S.

During World War II, the Procurement Division of the Army needed a ration bar for troops that weighed four ounces, would not melt at high temperatures and was high in food energy value. The Hershey chocolate technologists developed “Field Ration D,” which was so successful that approximately 24 million bars were produced every week by the end of 1945.

More successful still was Hershey’s Tropical Chocolate Bar, a heat-resistant bar with an improved flavor developed in 1943 and shown in this photograph.

To learn more about how wars have shaped the nation’s history, visit the National Museum of American History’s “Price of Freedom” exhibition website.