Among rhesus macaque monkeys, mothers who weigh more and have had previous pregnancies produce more and better breast milk for their newborn infants than mothers who weigh less and are less experienced. Now, a new study from the University of California, Davis, and the Smithsonian’s National Zoological Park uses this natural variation in breast milk quality and quantity to present evidence that a mother’s milk sends a reliable signal to very young infants about their environment. This signal may program the infant’s behavior and temperament according to expectations of available resources and discourages temperaments that may prove risky when food is scarce. 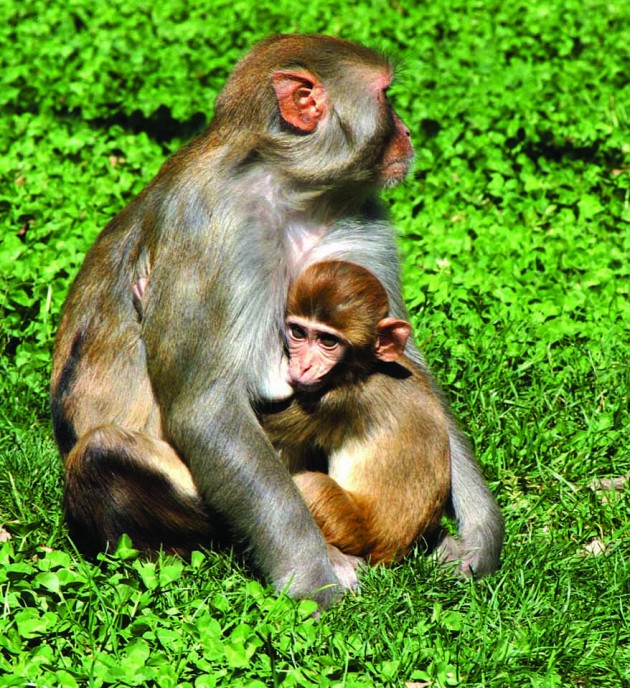 The study, conducted by anthropologist Katie Hinde and psychologist John Capitanio, used large groups of rhesus macaque monkeys living in an outdoor enclosure at the California National Primate Research Center at Davis. Researchers collected milk two different times from 59 mothers: once when their infants were one-month-old and again when the infants were 3.5-months-old. Researchers recorded the quantity of milk produced by each mother and the energy value of each monkey’s milk was analyzed for its content of sugars, proteins and fat. These figures were combined to calculate the available milk energy generated by each individual mother. 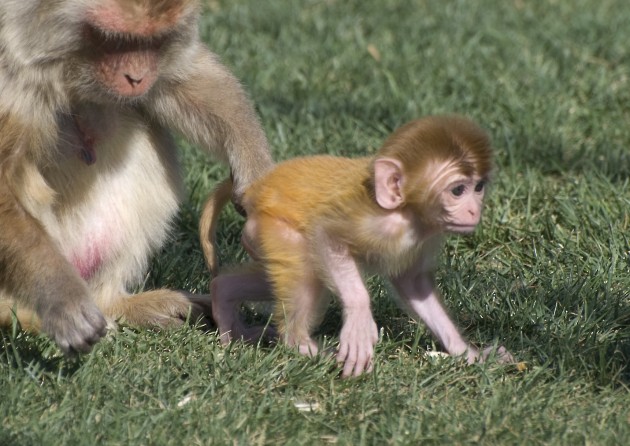 A rhesus macaque infant and its mother at the California National Primate Research Center. (Photo by Kathy West/CNPRC).

Although all of the monkeys in the experiment were fed regularly, the researchers found natural variation in the quantity and richness of the milk generated by the 59 mothers. Milk from mothers who weighed more and had had previous pregnancies, the study found, contained higher available energy when their infants were one month of age. Lighter, less experienced mothers produced milk with lower available energy.

At 3-4 months each infant was temporarily separated from its mother and assessed according to its behavior and temperament. The study found that infants whose mothers had higher levels of available milk energy soon after their birth, coped more effectively (moved around more, explored more, ate and drank) and showed greater confidence (were more playful, exploratory, curious and active) with this new situation. Infants whose mothers had lower milk energy had lower activity levels and less confidence when separated from their mother (they were less exploratory, playful, active and curious). Mothers and infants were reunited immediately after the experiment.

“This is the first study for any mammal that presents evidence that natural variation in available milk energy from the mother is associated with later variation in infant behavior and temperament,” Hinde says. “Our results suggest that the milk energy available soon after birth may be a nutritional cue that calibrates the infant’s behavior to environmental or maternal conditions.”

The milk the infant is getting at the time of its behavioral assessment does not predict its behavior and temperament, Hinde emphasizes. It is the milk it gets at 1 month, when the infant first becomes behaviorally active, that has an organizational effect on its behavior. “Whether or not this behavior is persists into adulthood is an important question and one we are in the process of addressing,” Hinde says.

An early view version of this scholarly paper by Hinde and Capitanio reporting these results was recently published in the American Journal of Primatology.