Perched head down on the lower trunks of coconut palms on the Fijian island of Rotuma, the skink Emoia oriv uses its vantage point to scan the ground for worms, insects and other prey. Coppery brown with lime green sides, this small reptile is a common sight on Rotuma yet remarkably it was only described and given a scientific name a few months ago by George Zug, a herpetologist at the Smithsonian’s National Museum of Natural History in Washington, D.C.

Emoia oriv, in fact, is one of four skinks Zug has helped name and describe in the past year, the others are Emoia mokolahi, a skink from Tonga; and Smoia tuitarere and Emoia tuitarerea, two skinks from the Cook Islands in the south-central Pacific.

Image above: The newly-named skink Emoia oriv from the Fijian island of Rotuma. (Photo by Paddy Ryan)

Q. Just what is a skink?

A. A lizard. A member of the Scincoformata group of lizards, which includes night lizards, girdled lizards, plated lizards and skinks. Almost all skinks have smooth, shiny scales and generally robust, cylindrical bodies with moderately short limbs. Their tail length is usually equal to or greater than, as much as 150 percent, of the animal’s snout-vent length. [Snout-vent length, or SNV, is a standard measurement for reptiles equivalent to the distance from the tip of the animal’s snout to the vent opening of its cloaca, or cavity containing its intestinal, urinary and regenerative canal openings). Skink heads are usually slightly larger than their necks, oval when seen from above and topped with larger scales.

Skink colors are variable. Our east coast species have a black background and white stripes. The heads in males may be reddish brown; young have blue tails. A dark background and light longitudinal stripes is common throughout the world of skinks. However, there are gray skinks, brown ones (in these the tail is often orange to red), and green (from dull to bright). 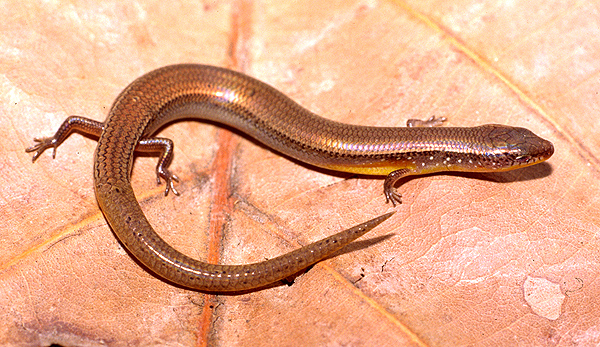 Q. How many species of skink are known?

A. Presently there are more than 5,600 species of lizards. Of these skinks number more than 1,510 species.

Q. What do skinks eat?

A. Most are insectivorous, insectivorous in the broad sense that they will eat any invertebrate. Some are carnivores that will eat any prey item they can catch, subdue and swallow. Some skinks prey on other lizards and small snakes. A few are herbivores.

Q. How large do skinks get?

Q. How long have skinks lived on earth?

A. Since the mid to late Jurassic or roughly 160 to 170 million years. 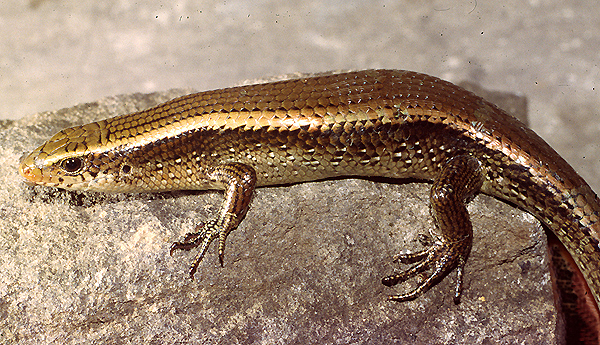 A. The skinks that I study are not particularly exciting in behavior or appearance. Although one of the Burmese species that I have been gathering data on is a live-bearer [its young are born alive and are not hatched from eggs]. There are a fair number of live-bearing skinks and many of them have a mammalian type placenta.

Q. Please describe an average day in life of a skink.

A. With more than one thousand species and worldwide in distribution, skinks have a multitude of predators. Birds, and not just hawks and owls. Snakes, where skinks are plentiful and diverse, some snake species specialize on skinks. One of the legless geckos specializes on skinks and has evolved a hinged lower jaw and folding teeth so that when it bites/grabs a skink, the head and lower jaw close like a ratchet-pliers and lock around the body of the skink.