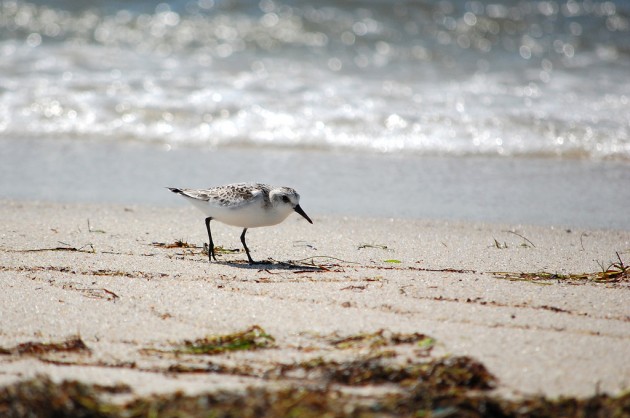 Scientists from the Smithsonian and colleagues have found that waterbird communities can be the “canary in the coal mine” when it comes to detecting the health of urban estuary ecosystems. Their research revealed that the types of waterbirds that inhabit urban estuaries are influenced not only by urban development, but also by a far more natural process―rain. The team’s findings are published in the scientific journal PLoS ONE.

The scientists compared waterbird communities in estuaries of the Chesapeake Bay during 2002, a year of severe drought, to 2003, a year of high rainfall. During the drier year, the species of waterbirds present included both those that fed generally on many species of invertebrates and those that only fed on specific ones. However, the waterbird community was made up of most generalists the following year after heavy rain. The high rainfall increased nutrient runoff into the estuaries which reduced the estuaries’ populations of small invertebrates. Because the dynamics of the invertebrate populations were affected, so in turn were the dynamics of the waterbird communities that fed on them.

“We’re seeing more extreme rainstorms in this region, so our results give a snapshot of what bird communities in urban estuaries might look like in the future,” said Colin Studds, lead author and postdoctoral fellow at the Smithsonian Conservation Biology Institute at the time of the research. “As urban development continues, we need new solutions for managing water quality or we stand to lose the Bay’s iconic natural treasures.”

Top members of estuary food chains such as waterbirds are not often considered when monitoring the stressors and indicators in the ecosystem. The team’s research, however, shows that estuarine management could be improved by tracking the relationships between land development, water quality and waterbird communities. Understanding the relationships between the three could help improve strategies to protect these unique ecosystems as urban development increases.