Alien Earths may have formed in Universe earlier than expected

Building a terrestrial planet requires raw materials that weren’t available in the early history of the universe. The Big Bang filled space with hydrogen and helium. Chemical elements like silicon and oxygen — key components of rocks — had to be cooked up over time by stars. But how long did that take? How many of such heavy elements do you need to form planets? 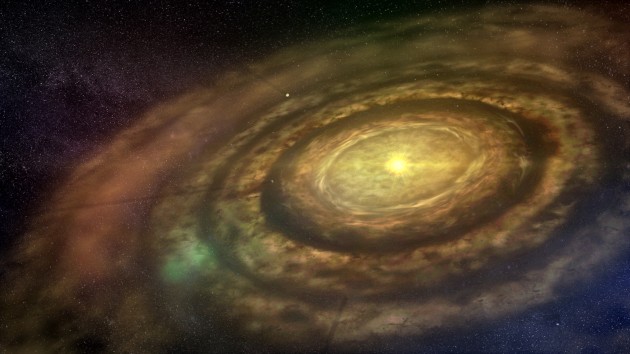 This artist’s conception shows a newly formed star surrounded by a swirling protoplanetary disk of dust and gas. Debris coalesces to create rocky ‘planetesimals’ that collide and grow to eventually form planets. The results of this study show that small planets form around stars with a wide range of heavy element content, suggesting that their existence might be widespread in the galaxy. (Credit: University of Copenhagen/Lars Buchhave)

Previous studies have shown that Jupiter-sized gas giants tend to form around stars containing more heavy elements than the Sun. However, new research by a team of astronomers found that planets smaller than Neptune are located around a wide variety of stars, including those with fewer heavy elements than the Sun. As a result, rocky worlds like Earth could have formed earlier than expected in the universe’s history.

“This work suggests that terrestrial worlds could form at almost any time in our galaxy’s history,” said Smithsonian astronomer David Latham (Harvard-Smithsonian Center for Astrophysics). “You don’t need many earlier generations of stars.”

Latham played a lead role in the study, which was led by Lars A. Buchhave from the University of Copenhagen and will be published in the journal Nature. The work is being presented today in a press conference at the 220th meeting of the American Astronomical Society.

Latham and his colleagues examined more than 150 stars known to have planets, based on data from NASA’s Kepler spacecraft. They measured the stars’ metallicities and correlated that with the sizes of the associated planets. Large planets tended to orbit stars with solar metallicities or higher. Smaller worlds, though, were found around metal-rich and metal-poor stars alike.

They found that terrestrial planets form at a wide range of metallicities, including systems with only one-quarter of the Sun’s metal content.

Their discovery supports the “core accretion” model of planet formation. In this model, primordial dust accumulates into mile-sized planetesimals that then coalesce into full-fledged planets. The largest, weighing 10 times Earth, can then gather surrounding hydrogen and become a gas giant.

A gas giant’s core must form quickly since hydrogen in the protoplanetary disk dissipates rapidly, swept away by stellar winds in just a few million years. Higher metallicities might support the formation of large cores, explaining why we’re more likely to find a gas giant orbiting a metal-rich star.

“This result fits with the core accretion model of planet formation in a natural way,” said Latham.

Planets form around many star types, but intelligent life is probably rare