Planets form around many star types, but intelligent life is probably rare

Since the mid 1990s, astronomers have found more than 400 planets orbiting distant stars. Those planets aren’t easy to spot, so astronomers choose their targets carefully. 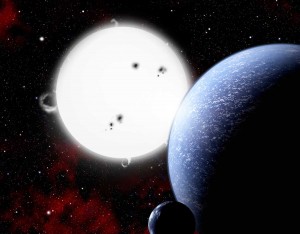 Image right: In this artist’s conception a hypothetical alien world and its moon orbit a hot, massive, type B star. Due to the short lifetime of such a star, complex life is unlikely to be found there. (Illustration by David A. Aguilar)

New research by astronomers at the Harvard-Smithsonian Center for Astrophysics and the National Optical Astronomy Observatory confirms that planet formation is a natural by-product of star formation, even around stars much heftier than our Sun. And planets that form around those hefty stars seem to come together very quickly.

“We see evidence of planet formation on fast forward,” says Xavier Koenig of the CfA. 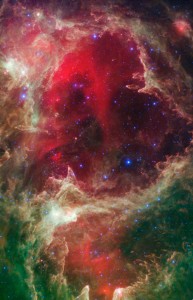 Koenig and his colleagues examined an area of space called W5, which lies about 6,500 light-years away toward the constellation Cassiopeia—or about 39,000 trillion miles. Hundreds of stars are forming in W5, ranging in size from a fraction of a sun to many suns.

Image left: This infrared portrait of the W5 star-forming region is from NASA’s Spitzer Space Telescope.

The team emp loyed NASA’s Spitzer Space Telescope and the ground-based Two Micron All-Sky Survey to look for evidence of dusty planet-forming disks. They targeted more than 500 type A and B stars, which are about 2 to 15 times as massive as the Sun. Sirius and Vega, not included in this study, are two type A stars easily visible to backyard skygazers.

The team found that about one-tenth of the stars examined appear to possess dusty disks. Of those, 15 showed signs of central clearing, which suggests that newborn Jupiter-sized planets are sucking up material.

Planet formation around A and B stars is a battle between opposing forces.  On one hand, the stars’ disks tend to be more massive and contain more of the raw materials to build planets. On the other hand, fierce stellar radiation and winds try to destroy the disks rapidly. 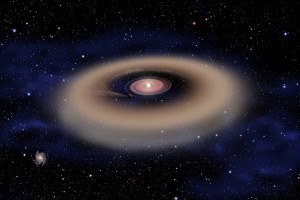 Image right: This artist’s conception shows a Jupiter-sized planet forming from a disk of dust and gas surrounding a young, massive star. The planet’s gravity has cleared a gap in the disk. (Illustration by David A. Aguilar)

The stars in W5 are only about two to five million years old, yet most have already lost the raw materials needed to form planets. This indicates that, at least for type A and B stars, planets must form quickly or not at all.

The prospects for hypothetical alien life are disappointing. The habitable zone, or region where liquid water could exist on a rocky surface, is at a greater distance from the star for A and B stars than for sun-like stars due to their greater luminosity. However, that luminosity comes at the price of a short lifetime. A and B stars live for only about 10 to 500 million years before running out of fuel.

Life existed on Earth for 3.5 billion years in very simple forms, before the Cambrian explosion led to the diversity of life forms we see today. Planets in W5 around these more massive stars wouldn’t have that opportunity.

“These stars aren’t good targets in the hunt for extraterrestrials,” Koenig says, “but they give us a great new way to get a better understanding of planet formation.”  —Christine Pulliam