New high-tech 3-D computer analysis of 50 spear points made more than 10,000 years ago by North America’s mysterious Clovis people has revealed the stone points display an astounding symmetry despite having been found in caches as far apart as Maryland, Arizona and Colorado. The only explanation for such symmetry across these vast distances, explains Smithsonian anthropologist Dennis Stanford, is that the method of creating the points was handed down from person to person.

“We were shocked. Basically what we are looking at is a technology that was learned from one person to another, from father to son or from uncle to nephew,” explains Stanford, co-author of a recent paper on the discovery in the Journal of Archaeological Science. 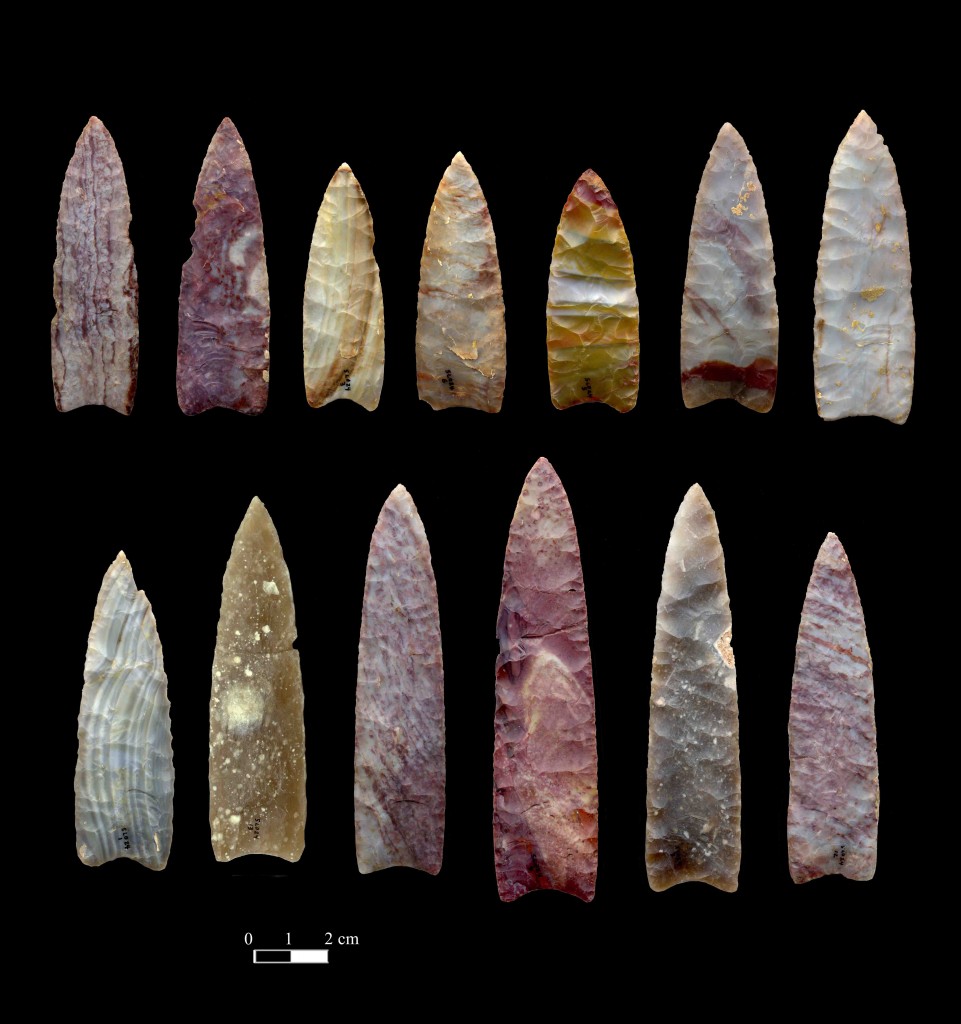 The researchers believe encounters between Clovis knappers, or stone point makers, from different groups at stone quarry sites or in settlements certainly “facilitated the sharing of technological information by allowing knappers to observe tools and techniques used by other artisans,” explains co-author Sabrina Sholts of the Human Evolution Research Center at the University of California in Berkeley. “The tools selected by the knappers, as well as how they were handled and applied, certainly were part of the Clovis technology,” that was shared between families and tribes.

This video was created by Sabrina Sholts of the Human Evolution Research Center at the University of California in Berkeley using 3-D digital scans of a Clovis stone projectile point from the collections of the Department of Anthropology, National Museum of Natural History, Smithsonian Institution.

In fact, the researchers say, through a strong communication network  Clovis spear point technology spread across North America in as little as 200 years. Radiocarbon dating of the stone points backs this theory. Many Clovis points “have been recovered from kill sites, in association with the remains of animals such as mammoths and bison,” Sholts says. This “suggests that they were effective for hunting large prey.”

The scientists used high-tech 3-D scanning to create detailed images of the Clovis points from the collection of the Smithsonian’s National Museum of Natural History. The researchers focused particularly on the contours of the scars on the front and back of each bi-face spear point where individual stone flakes were carefully and systematically removed centuries ago by striking with an implement made of antler, bone, ivory or even perhaps hardwood. Each 3-D scan records millions of minute measurements, revealing “subtle differences in the various steps of reduction [flaking off tiny pieces of stone] and nuances that you can’t see with your eyes,” Stanford explains.

“One nice thing about the study is its relative objectivity,” Sholts points out. With the 3-D imaging, “it is really very automated. What we are doing is essentially data analysis, capturing the contours and curvature of the surface of each biface in a standard way. The results were surprising to me.”

This 3-D study has laid to rest the theory that Clovis technology spread region by region from knappers who copied lost or discarded stone points they had found, Stanford says. In fact, the paper reveals, part of the research included projectile points made by an expert modern-day knapper who closely studied and copied Clovis points in the Smithsonian collection. Computer analysis revealed these modern creations do not share the same symmetry as do the authentic Clovis points—further proof that the real Clovis points were a learned technology.

“We are now working on a new study with Clovis points from California that we are putting into that same computer matrix,” Stanford says.–John Barrat