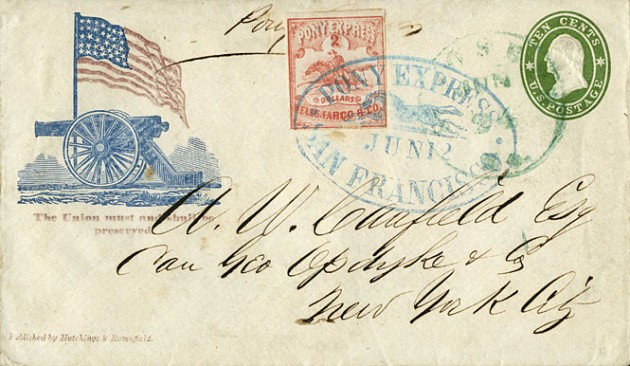 This week’s Smithsonian Snapshot celebrates the April 3, 1860, anniversary of the Pony Express.

In 1860, a relay system of horses began to carry mail across the 1,966-mile “central route” between St. Joseph, Mo., and Sacramento, Calif. This privately owned service was known as the Pony Express.

The Pony Express was replaced by a stagecoach line after only 18 months. Because of its short-lived service, there is not much surviving mail.

In June 1861, this envelope was carried from San Francisco to A.W. Canfield in New York City. It took 12 days to reach its destination. It features full markings, stamp and a patriotic cachet from the Pony Express mail route. This tells the important story of postal history during the late 1800s. It was collected by the Smithsonian in 1971.

During the Pony Express journey, riders stopped about every 10 miles at one of 165 stations along the route. At each station, the rider exchanged his horse for a rested one. The Pony Express service guaranteed mail to reach the East Coast in about 12 days. The additional cost for this service was $5—roughly $133 in today’s currency—per half-ounce.

To learn more about the history of the world’s best-known mail carriers, visit the “Pony Express: Romance versus Reality” exhibit on view at the National Postal Museum.

This item is one of 137 million artifacts, works of art and specimens in the Smithsonian’s collection. It is not currently on display. To learn more about this item, visit the National Postal Museum’s website.