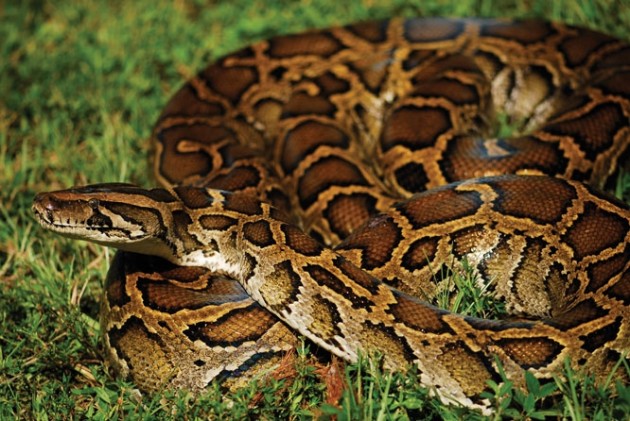 Burmese pythons (Python molurus bivittatus), native to southern Asia, have taken up a comfortable residence in the state of Florida, especially in the Everglades. In addition to out-competing native wildlife for resources and habitat, the pythons are eating the native wildlife. (Photo by Sarah L. Stewart)

Smithsonian scientists and their colleagues have uncovered a new threat posed by invasive Burmese pythons in Florida and the Everglades: The snakes are not only eating the area’s birds, but also the birds’ eggs straight from the nest. The results of this research add a new challenge to the area’s already heavily taxed native wildlife. The team’s findings are published in the online journal Reptiles & Amphibians: Conservation and Natural History.

Burmese pythons, native to southern Asia, have taken up a comfortable residence in the state of Florida, especially in the Everglades. In addition to out-competing native wildlife for resources and habitat, the pythons are eating the native wildlife. Burmese pythons (Python molurus bivittatus) were first recorded in the Everglades in 1979—thought to be escaped or discarded pets. Their numbers have since grown, with an estimated breeding population in Florida in the tens of thousands. 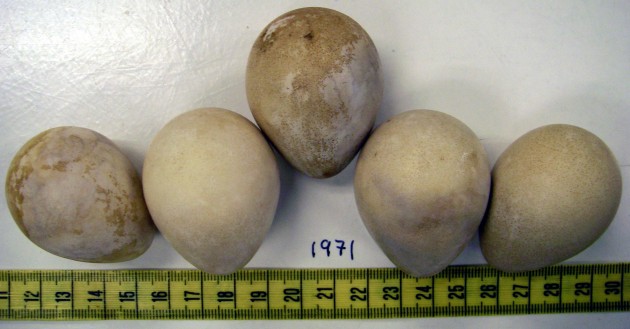 In an ongoing study to better understand the impact of this snake in the Everglades, scientists from the Smithsonian Institution, the National Park Service and others have been examining the contents of the digestive tracts of pythons in the area. They have shown that Burmese pythons consume at least 25 different species of birds in the Everglades, but until now no records documented this species eating bird eggs. 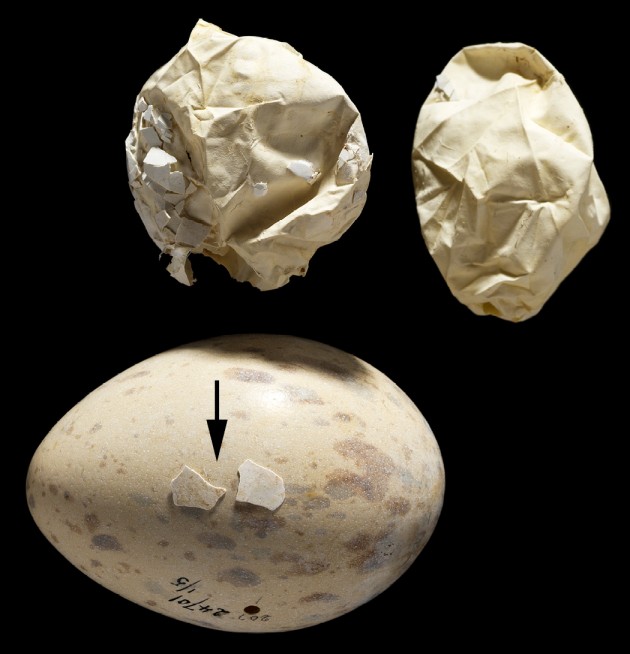 Two Limpkin (Aramus guarauna) crushed but intact eggs (top) recovered from a Burmese python digestive tract and com­pared to a reference Limpkin specimen from the Smithsonian’s collection (below) for size and color patterns. The arrow shows fragments of eggshells from the python sample placed on the Smithsonian specimen for color comparison. (Photo by Don Hurlbert)

“This finding is significant because it suggests that the Burmese python is not simply a sit-and-wait predator, but rather is opportunistic enough to find the nests of birds,” said Carla Dove, ornithologist at the Smithsonian’s Feather Identification Lab in the National Museum of Natural History and lead author of the study. “Although the sample size is small, these findings suggest that the snakes have the potential to negatively affect the breeding success of native birds.”

Scientists collected a 14-pound male python that was 8 1/2 feet long near a property with free-ranging guineafowl. The snake regurgitated 10 whole guineafowl eggs soon after it was captured. The team discovered the remains of two bird eggs in another python collected for the study―a 30-pound female more than 10 feet long. Scientists used DNA tests on the membrane of the crushed eggs and comparisons of the shell fragments with egg specimens in the Smithsonian’s collection to determine what the female snake had eaten. Their research revealed the species to be the limpkin (Aramus guarauna), a large wading bird found in marshes and listed as a “species of special concern” by the Florida Fish and Wildlife Conservation Commission. 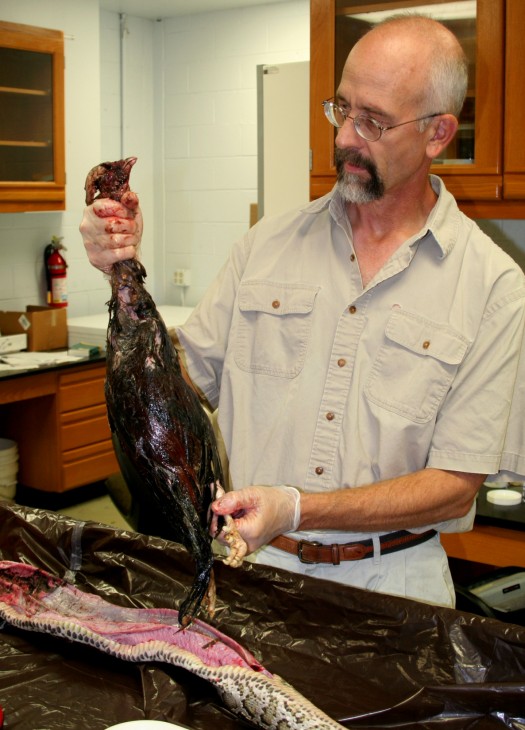 There are several species of snake known to eat bird eggs. Those species are equipped with pointed or blade-like extensions on the vertebrae in their esophagus that punctures the eggshell, making it easy for the snake to crush the egg and digest its contents. Burmese pythons do not have these adaptations. However, the pythons studied were so large in relation to the eggs they ingested that the scientists believe these specialized vertebrae may not have been needed.

“Our observations confirm that invasive Burmese pythons consume not only adult birds but also eggs, revealing a previously unrecognized risk from this introduced predator to nesting birds,” said Dove. “How frequently they are predating on bird eggs is hard to know.”

In an earlier stage of the study, the scientists collected more than 300 Burmese pythons in Everglades National Park and found that birds, from the 5-inch-long house wren to the 4-foot-long great blue heron, accounted for 25 percent of the python’s diet in the Everglades.