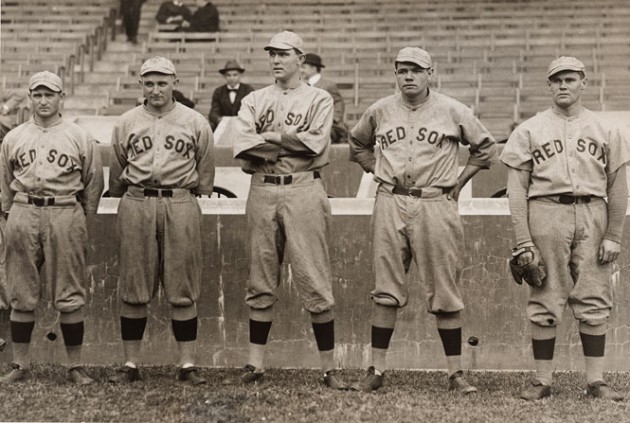 On April 20, 1912, the home ballpark of the Boston Red Sox opened to the public in Boston. The Red Sox beat the New York Highlanders, renamed the New York Yankees in 1913, 7-6 in 11 innings. Newspaper coverage of the opening was overshadowed by continuing coverage of the Titanic sinking days earlier April 14, 1912.

In 1914, the Red Sox acquired George Herman Ruth Jr., best known as “Babe” Ruth, as their all-star pitcher. This 1915 photo shows Ruth with the pitching staff that helped propel the Red Sox to a World Series Championship the same year. This photo marks Ruth’s second season in the major leagues.

In six seasons as a pitcher, the 24-year-old Ruth compiled an 89-46 won-lost record, with a 2.28 ERA and three World Series victories. Had he continued to pitch he would have ranked among baseball’s greatest pitchers.

This is a rare photograph of Ruth in the beginning of his career; it helps the Smithsonian fully describe the impact of this legendary baseball player.

To view more sports-related items at the Smithsonian, visit the National Museum of American History’s sports and leisure collection.

This item is one of 137 million artifacts, works of art and specimens in the Smithsonian’s collection. It is not on display. To learn more about this item, visit the National Portrait Gallery’s website.