In the distant reaches of the universe, almost 13 billion light-years from
Earth, a strange species of galaxy lay hidden. Cloaked in dust and dimmed by
the intervening distance, even the Hubble Space Telescope couldn’t spy it.
It took the revealing power of NASA’s Spitzer Space Telescope to uncover not
one, but four remarkably red galaxies. And while astronomers can describe
the members of this new “species” of galaxy, they can’t explain what makes them so
ruddy. 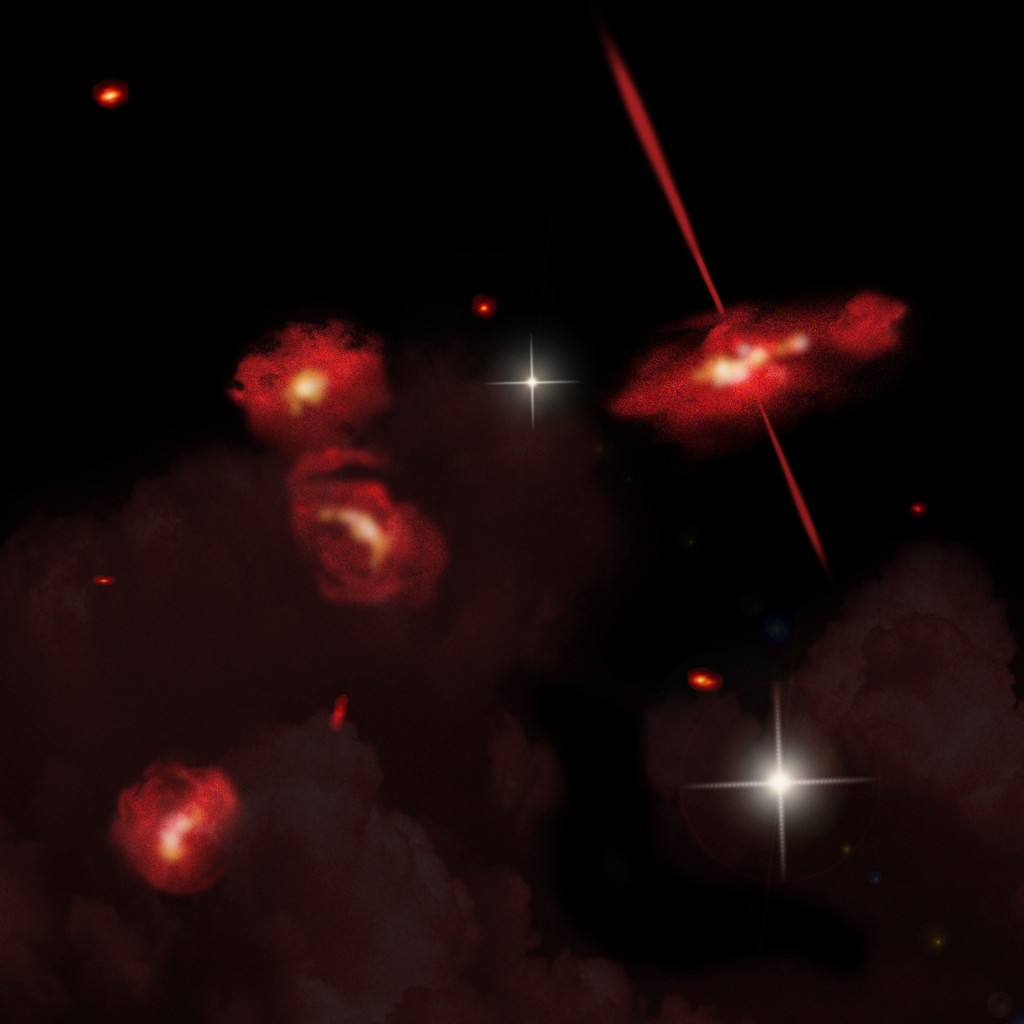 This artist’s conception portrays four extremely red galaxies that lie almost 13 billion light-years from Earth. These galaxies appear to be physically associated and may be interacting. One galaxy shows signs of an active galactic nucleus, shown here as twin jets streaming out from a central black hole. (Image by David A. Aguilar)

“We’ve had to go to extremes to get the models to match our observations,”
said Jiasheng Huang of the Harvard-Smithsonian Center for Astrophysics. Huang is lead author on a paper announcing the find, recently
published online by The Astrophysical Journal.

Spitzer succeeded where Hubble failed because Spitzer is sensitive to
infrared light–light so red that it lies beyond the visible part of the
spectrum. The newfound galaxies are more than 60 times brighter in the
infrared than they are at the reddest colors Hubble can detect.

Galaxies can be very red for several reasons. They might be very dusty. They
might contain many old, red stars. Or they might be very distant, in which
case the expansion of the universe stretches their light to longer
wavelengths and hence redder colors (a process known as redshifting). All
three reasons seem to apply to the newfound galaxies.

All four galaxies are grouped near each other and appear to be physically
associated, rather than being a chance line-up. Due to their great distance,
we see them as they were only a billion years after the Big Bang – an era
when the first galaxies formed.

“Hubble has shown us some of the first protogalaxies that formed, but
nothing that looks like this. In a sense, these galaxies might be a ‘missing
link’ in galactic evolution” said co-author Giovanni Fazio of the CfA.

Next, researchers hope to measure an accurate redshift for the galaxies,
which will require more powerful instruments like the Large Millimeter
Telescope or Atacama Large Millimeter Array. They also plan to search for
more examples of this new “species” of extremely red galaxies.

“There’s evidence for others in other regions of the sky. We’ll analyze more
Spitzer and Hubble observations to track them down,” said Fazio.

In search for life, ultraviolet light may be ultra important