Research team to explore how microbial diversity defends against disease 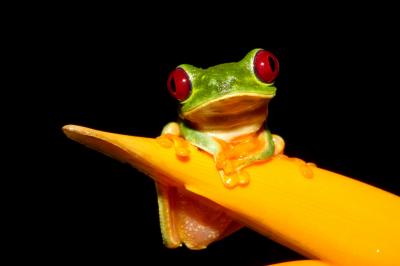 The Red-eyed treefrog (Agalychnis callidryas) is one of the species the team will be examining in Panama. (Photo by Brian Gratwicke)

Amphibians are among the most threatened creatures on earth, with some 40 percent of amphibian species threatened or endangered. One of their primary threats is a rapidly spreading disease that attacks the skin cells of amphibians. “Chytridiomycosis, a fungal disease, has been a key factor in the extinctions of many species of frogs around the world,” says Lisa Belden, associate professor of biological sciences in the College of Science at Virginia Tech.

Belden is leading a team of researchers who will study the microbial communities living on the skins of frogs that are surviving the fungal scourge. The effort is one of 11 new Dimensions of Biodiversity projects funded by the National Science Foundation with the aim of transforming, by 2020, how scientists describe and understand the scope and role of life on earth. Additional members of the $2 million research project are Virginia Tech’s Leanna House, assistant professor of statistics, and Roderick Jensen, professor of biological sciences; Brian Gratwicke, a research biologist at the Smithsonian Conservation Biology Institute, and Roberto Ibáñez, a scientist at the Smithsonian Tropical Research Institute in Panama; Reid Harris, professor of biology at James Madison University; and Kevin Minbiole, assistant professor of organic and natural products chemistry at Villanova University;

As leaders of the Panama Amphibian Rescue and Conservation Project the Smithsonian’s Brian Gratwicke and Roberto Ibáñez are maintaining captive colonies of endangered Panamanian frogs that are highly susceptible to the chytrid fungus. The hope is that the use of probiotics will someday allow release some of these species back into nature.

The research team is interested in whether microbial communities on the skin of frogs have a role in disease resistance, in particular to the devastating chytrid fungus. And if there is such immunity, does it rely on the same mechanism from one frog to another, on different species of frogs, and in different locations?

“Our long-term goal is to try to develop probiotics” – to share the biochemistry employed by beneficial microbes with frogs who need it,” Belden said.