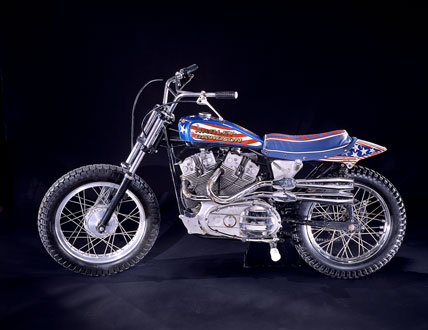 During his career, Knievel suffered 35 to 40 broken bones as a result of his daring stunts. In 1965, Knievel starred in his own daredevil show bringing national attention to his stunts. His shows were televised nationwide. His show featured motorcycle “wheelies,” off-beat vehicles and jumps over rows of automobiles, trucks and buses. Knievel rode this motorcycle during some of his most spectacular jumps.

This custom 1972 Harley-Davidson XR-750 is made of steel, aluminum and fiberglass, and it weighs approximately 300 pounds. In 1975 he used it to jump 14 Greyhound buses.