The Zoo’s Smithsonian Conservation Biology Institute in Front Royal, Va., is celebrating the recent hatching of two Micronesian kingfisher (Todiramphus c. cinnamominus) chicks, a female and male, born July 25 and Aug. 20, respectively. A third chick hatched at the Zoo’s Bird House Sept. 3, but it died Sept. 5 of unknown causes. This boost brings the total population of Micronesian kingfishers to 131 birds. The National Zoo cares for about eight percent of the population—eight birds live at SCBI-Front Royal and two live at the Bird House. The Micronesian kingfisher has been extinct in the wild for more than 20 years. 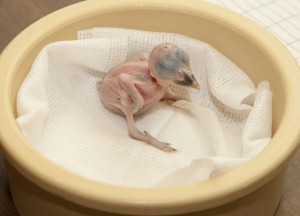 This species is extremely difficult to breed due to incompatibility between males and females and the inability of some parents to successfully raise their own chicks. The chick that hatched at the Bird House was incubated and raised by its parents. Keepers weighed it each day to make sure it did not need supplemental feeding. A final pathology report will provide more information about the cause of its death.

“We are encouraged that this pair showed an interest in one another and delighted that they produced fertile eggs,” said Warren Lynch, bird unit manager at SCBI. “We are hand-rearing the chicks, which involves feeding them at two-hour intervals, seven to eight times per day. Should the adults produce fertile eggs again, we will likely let them try to raise the chicks themselves while closely monitoring their parenting skills.” 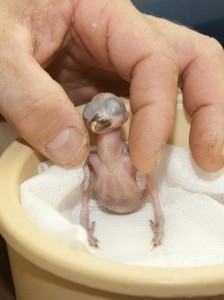 Micronesian kingfishers flourished in Guam’s limestone forests and coconut plantations until the arrival of the brown tree snake (Boiga irregularis), an invasive species that stowed away in military equipment shipped from New Guinea after World War II. Because these reptiles had no natural predators on Guam, their numbers grew and they spread across the island quickly. Within three decades, they hunted Micronesian kingfishers and eight other bird species to the brink of extinction.

In 1984, Guam’s Department of Aquatic and Wildlife Resources captured the country’s remaining 29 Micronesian kingfishers and sent them to zoological institutions around the globe—including the National Zoo—as a hedge against extinction. The Association of Zoos and Aquariums created a Species Survival Plan for the birds. The SSP pairs males and females in order to maintain a genetically diverse and self-sustaining population. 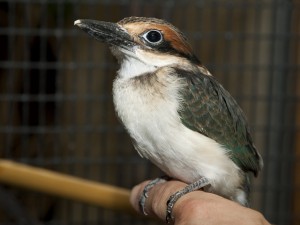 To date, 16 chicks have hatched at SCBI, and each provides scientists with the opportunity to learn about the growth, reproduction, health and behavior of the species. Five of SCBI’s kingfishers have gone to other zoos to breed.

“We’re proud that SCBI has been a part of the Micronesian kingfisher recovery from the start, and we hope this pair continues to produce healthy offspring and contribute to its species’ survival,” said Chris Crowe, bird keeper at SCBI. “Both chicks are thriving. The female flies short distances and is increasingly confident and vocal, and the male is beginning to grow feathers and has a healthy appetite for crickets, mice and small lizards.”

As the captive population increases, the U.S. Fish and Wildlife Service and Guam’s Department of Aquatic and Wildlife Resources continue to look for suitable release sites in Guam. The availability of release sites continues to shrink, however, due to deforestation and human expansion. Controlling the brown snake population remains a significant challenge as well, though researchers have made progress in developing a variety of barriers, traps and toxicants. Scientists are hopeful that initiatives for snake control and forest protection signify that the reintroduction of the Micronesian kingfisher may soon become feasible. Additionally, field studies of a different subspecies of wild kingfishers are underway on Pohnpei, another Micronesian island, to secure essential biological information on wild populations and to test various reintroduction techniques for use on Guam.