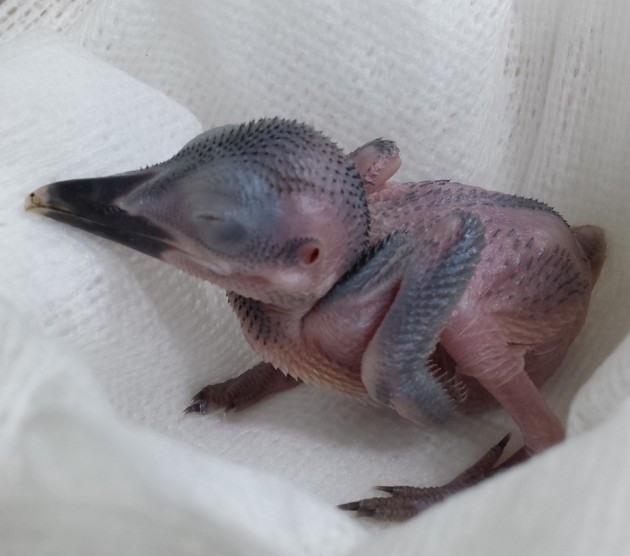 This species is extremely difficult to breed due to incompatibility between males and females and the inability of some parents to successfully raise their own chicks.  Animal care staff are hand-raising the chick, which involves feeding it at two-hour intervals, seven to eight times per day.

Visitors to the Smithsonian’s National Zoo can see these critically endangered birds on exhibit in the Bird House. Micronesian kingfishers flourished in Guam’s limestone forests and coconut plantations until the arrival of the brown tree snake, an invasive species that stowed away in military equipment shipped from New Guinea after World War II.Because these reptiles had no natural predators on Guam, their numbers grew and they spread across the island quickly. Within three decades, they hunted Micronesian kingfishers and eight other bird species to the brink of extinction. 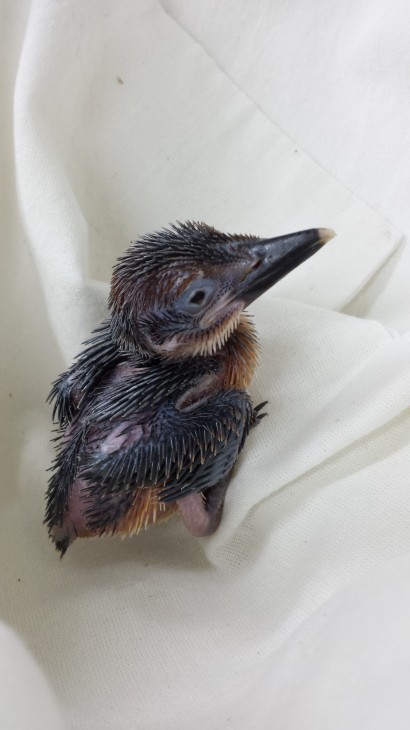 In 1984, Guam’s Department of Aquatic and Wildlife Resources captured the country’s remaining 29 Micronesian kingfishers and sent them to zoological institutions around the globe—including the National Zoo—as a hedge against extinction. The Association of Zoos and Aquariums created a Species Survival Plan for the birds. The SSP pairs males and females in order to maintain a genetically diverse and self-sustaining population.

As the captive population increases, the U.S. Fish and Wildlife Service and Guam’s Department of Aquatic and Wildlife Resources continue to look for suitable release sites in Guam. The availability of release sites continues to shrink, however, due to deforestation and human expansion.

Controlling the brown snake population remains a significant challenge as well. Scientists are hopeful that initiatives for snake control and forest protection signify that the reintroduction of the Micronesian kingfisher may soon become feasible. Additionally, field studies of a different subspecies of wild kingfishers are underway on Pohnpei, another Micronesian island, to secure essential biological information on wild populations and to test various reintroduction techniques for use on Guam.