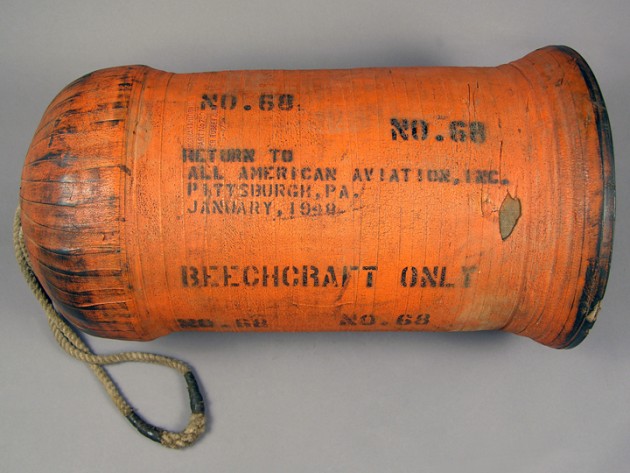 In the 1930s, U.S. postal officials tried different ways of moving the mail. One technique was called “skyhooking,” which brought the mail to rural towns that had no adequate railway or highway mail routes.

The mail was placed in a rubber container suspended between a pair of 15-foot-tall posts. The planes chosen for the service were rugged Stinson Reliants, tight-turning airplanes adapted to flying around hills and through valleys. The pilot would position the plane to hook the outgoing mail container using a 60-foot grappling hook on the airplane’s tail. Incoming mail would be dropped from the plane.

On May 12, 1939, the first scheduled service began flying two experimental routes led by the All American Aviation Co., now known as U.S. Airways. The first route went from Pittsburgh to Philadelphia. The other went from Pittsburgh to Huntington, WV. In the first year of service, All American Aviation flew more than 438,000 miles, making more than 23,000 pickups and handling 75,000 pounds of mail and 6,500 pounds of freight without a single casualty. By the summer of 1941, the line was serving more than 100 locations and picking up roughly 400,000 pieces of mail each month. The airline dropped its pickup operations in 1949 and converted to carrying passengers.

This item is one of 137 million artifacts, works of art and specimens in the Smithsonian’s collection. It is in the collection of the National Postal Museum and it is on display. For more info, visithttp://www.postalmuseum.si.edu/museum/1d_skyhooking_container.html