Climate change has a pervasive influence on the dispersal patterns of many plant and animal species, including tropical fish populations. A new study by a team of researchers including Osmar Luiz and Joshua Madin from the Macquarie University and D. Ross Robertson from the Smithsonian Tropical Research Institute, shows that depending on where the fish disperse from, the use of ‘stepping stones’, flotsam or simply being an adult can help in the journey to find a new home.To identify these success predictors Luiz and Madin analysed 985 tropical reef-fish species counterparts in Panama, the United States, Portugal and Brazil. Conducting their study across two major Atlantic marine barriers, the researchers identified success predictors that include: 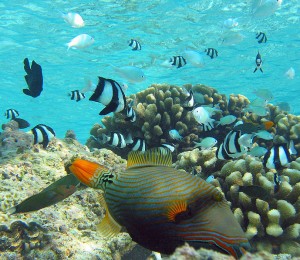 • an ability to raft with flotsam; as seen in the Mid-Atlantic Barrier
• use of non-reef habitats as ‘stepping-stones’; seen in the Amazon-Orinoco Plume
• large adult size and latitudinal range

In particular, the findings about the predictor of adult size sheds new light on previous thinking about dispersal, showing that variation in larval-development mode is not as significant in migratory dispersal as previously thought.

The researchers highlight the assessment of adult-biology traits when assessing which fish will have the best chances of establishing new populations.

Luiz and Madin have been exploring the dispersal patterns of tropical fish for some time, both globally and in Australia, through the SIMS facilities in Chowder Bay, Sydney.

“We have been investigating the possibility that tropical reef fish populations may start appearing in the Sydney area. As part of this research, we study the characteristics of different reef fish species to determine which traits could allow them to travel beyond the Great Barrier Reef to New South Wales, traits like those seen in this study,” Luiz says