A small eel-like fish newly discovered in a cave in the Republic of Palau in the western Pacific represents an extremely primitive “living fossil,” a team of researchers reveal in a paper published online today, Aug. 17, 2011, in the Proceedings of the Royal Society B. Protoanguilla palau, as the eel has been named, is different from other known eels in that it has a disproportionately large head, short compressed body, distinctive collar-like gill openings and slightly produced caudal fin rays. Genetic and bone analysis confirm this fish is a true eel, yet P. palau’s morphology also reveal some of its features are “more primitive than recent eels, and in others, even more primitive than the oldest known fossil eels,” the scientists write, “suggesting that it represents a ‘living fossil’ without a known fossil record.”

Many of the physical features of this new genus and species of eel reflect its relationship to the 19 families of Anguiliformes (true eels) currently living. Other, more primitive physical traits, such as a second upper jaw bone (premaxilla) and fewer than 90 vertebrae, have only been found in fossil forms from the Cretaceous period (140 million to 65 million years ago). Still other traits, such as a full set of bony toothed “rakers,” in the gill arches are a common feature in most bony fishes, but lacking in both fossil and living eels. The team’s analyses of total mitochondrial DNA indicate that P. palau represents an ancient, independent lineage with an evolutionary history comparable to that of the entire order of living and fossil eel species. 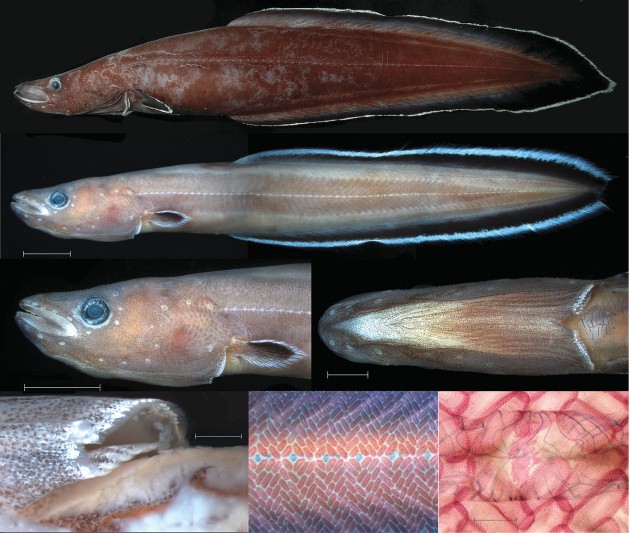 “The equivalent of this primitive eel, in fishes, has perhaps not been seen since the discovery of the coelacanth in the late 1930s,” said Dave Johnson, ichthyologist at the Smithsonian’s National Museum of Natural History and lead author of the team’s research. “We believe that such a long, independent evolutionary history, dating back to the early Mesozoic (about 200 million years ago), retention of several primitive anatomical features and apparently restricted distribution, warrant its recognition as a living fossil.”

“The discovery of this extraordinary and beautiful new species of eel underscores how much more there is to learn about our planet,” Johnson said. “Furthermore, it brings home the critical importance of future conservation efforts—currently this species is known from only 10 specimens collected from a single cave in Palau.”

The scientific paper describing the new eel, “A ‘living fossil’ eel (Anguilliformes: Protoanguillidae, fam. nov.) from an undersea cave in Palau.” is co-authored by G. David Johnson of the Division of Fishes at the Smithsonian’s National Museum of Natural History; Hitoshi Ida and Takashi Asahida of the School of Marine Life Sciences, Kitasato University, Japan; Tetsuya Sado and Masaki Miya of the Natural History Museum and Institute, Chiba, Japan; and Jiro Sakuae of the Southern Marine Laboratory, Palau.