Kandula, an 8-year-old male Asian elephant at the Smithsonian’s National Zoo, recently demonstrated to researchers for the first time that elephants are capable of insightful problem solving. During a series of experiments in which food was hung over Kandula’s head at a level just above his reach, the elephant seemed to experience an “aha” moment of insightful thinking. Spontaneously, he retrieved a large cube from another area in his enclosure, positioned it beneath the hanging food and stood on it with his two front feet. The added elevation allowed Kandula to grab and eat the food. 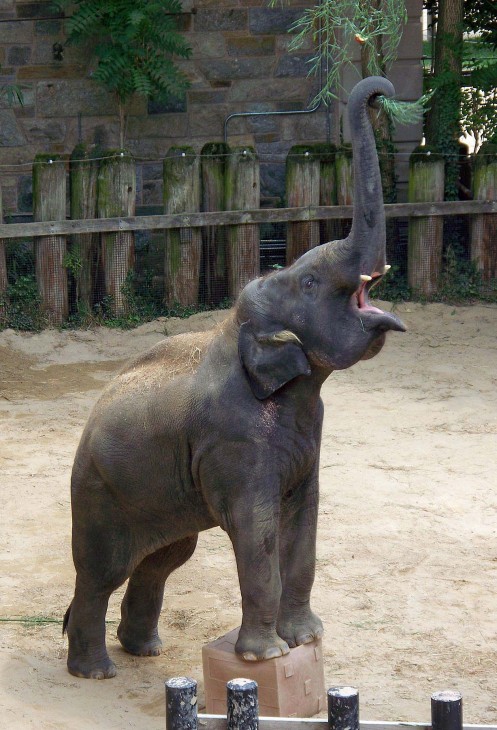 Kandula standing on a cube to reach food high above his head.

Kandula’s actions are “evidence that an elephant is capable of insightful problem solving through tool use,” the experiment’s investigators write in a scientific paper just published in the journal PLoS ONE. “Evidence for this ability is indicated by the suddenness of Kandula’s problem solving behavior without evidence of prior trial and error learning.”

The following day Kandula used the cube to again grab food high above his head, as well as explore objects that were previously out of reach in his enclosure. In later experiments the elephant showed the ability to generalize tool use by moving a different object, a large tractor tire, to the spot under the food and stand on it to reach the food.

Traditionally, elephants have performed poorly in spontaneous or insightful problem-solving tasks despite their large complex brains and that they exhibit complex social behavior and show a facility with tools, the researchers say. These previous tasks, however, may have failed to guage the depth of the elephant’s mind in that they required the animals to hold tools, such as sticks, in their trunks. Elephants use tools held in their trunks primarily for skin care, not to forage for food.

In light of Kandula’s recent behavior with the cube, researchers are reassessing these former experiments. “We believe that the problem in previous studies has been in treating the elephant trunk as a grasping appendage analogous to a primate hand,” they write. “Although the trunk is a highly manipulable appendage, in food foraging its function as a sensory organ may take precedence.” When grasping a stick, the tip of the elephant’s trunk “is curled backwards and may be closed, prohibiting olifactory and tactile feedback.” This may prevent the elephant from using trunk-held-tools in foraging for food.

Although the specific cognitive processes underlying Kandula’s behavior remains in question, “this study demonstrates that elephants are capable of insightful problem solving,” the researchers write. “When given the proper circumstances, elephants, like humans, and several other species, can demonstrate ‘aha’ moments.”