Astronomers have discovered the darkest known exoplanet – a distant, Jupiter-sized gas giant known as TrES-2b. Their measurements show that TrES-2b reflects less than one percent of the sunlight falling on it, making it blacker than coal or any planet or moon in our solar system.

In our solar system, Jupiter is swathed in bright clouds of ammonia that reflect more than a third of the sunlight reaching it. In contrast, TrES-2b (which was discovered in 2006 by the Trans-Atlantic Exoplanet Survey, or TrES) lacks reflective clouds due to its high temperature. 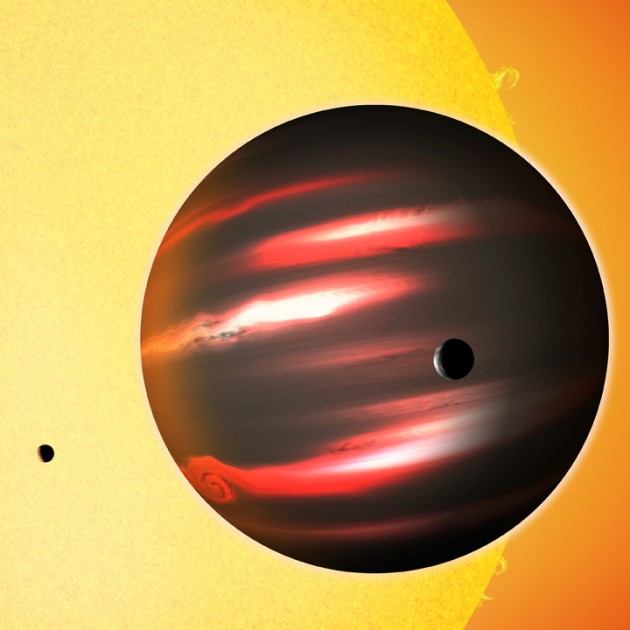 The distant exoplanet TrES-2b, shown here in an artist’s conception, is darker than the blackest coal. This Jupiter-sized world reflects less than one percent of the light that falls on it, making it blacker than any planet or moon in our solar system. Astronomers aren’t sure what vapors in the planet’s superheated atmosphere cloak it so effectively. (Image: David A. Aguilar)

TrES-2b orbits its star at a distance of only three million miles. The star’s intense light heats TrES-2b to a temperature of more than 1,800° Fahrenheit – much too hot for ammonia clouds. Instead, its exotic atmosphere contains light-absorbing chemicals like vaporized sodium and potassium, or gaseous titanium oxide. Yet none of these chemicals fully explain the extreme blackness of TrES-2b.

“It’s not clear what is responsible for making this planet so extraordinarily dark,” stated co-author David Spiegel of Princeton University. “However, it’s not completely pitch black. It’s so hot that it emits a faint red glow, much like a burning ember or the coils on an electric stove.”

Kipping and Spiegel determined the reflectivity of TrES-2b using data from NASA’s Kepler spacecraft. Kepler is designed to measure the brightnesses of distant stars with extreme precision.

The team monitored the brightness of the TrES-2 system as the planet orbited its star. They detected a subtle dimming and brightening due to the planet’s changing phase.

TrES-2b is believed to be tidally locked like our moon, so one side of the planet always faces the star. And like our moon, the planet shows changing phases as it orbits its star. This causes the total brightness of the star plus planet to vary slightly.

“By combining the impressive precision from Kepler with observations of over 50 orbits, we detected the smallest-ever change in brightness from an exoplanet: just 6 parts per million,” said Kipping. “In other words, Kepler was able to directly detect visible light coming from the planet itself.”

The extremely small fluctuations proved that TrES-2b is incredibly dark. A more reflective world would have shown larger brightness variations as its phase changed.

Kepler has located more than 1,200 planetary candidates in its field of view. Additional analysis will reveal whether any other unusually dark planets lurk in that data.

TrES-2b orbits the star GSC 03549-02811, which is located about 750 light-years away in the direction of the constellation Draco. (One light-year is about 6 trillion miles.)

This research has been accepted for publication in the Monthly Notices of the Royal Astronomical Society and is available online.