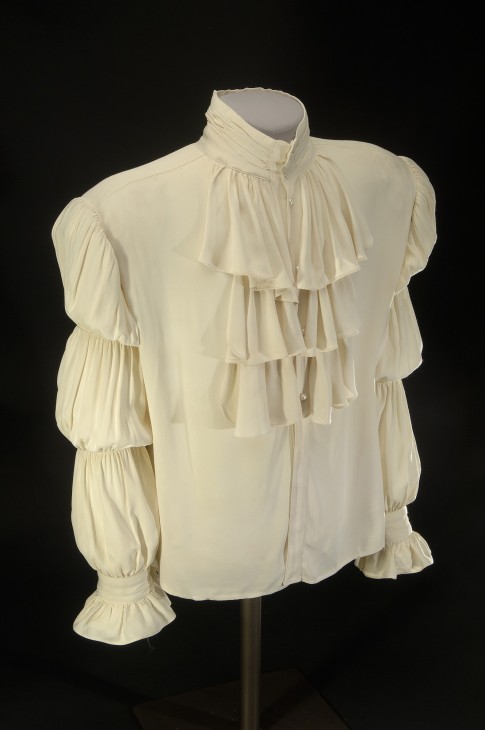 On July 5, 1989, NBC officially debuted Seinfeld, the American TV sitcom famously described as a show “about nothing.” Created by Larry David and Jerry Seinfeld, the hit series reveled in the absurd situations that emerged from the everyday lives of its four urbanite main characters: Jerry, George, Elaine and Kramer.

On a memorable episode, comedian Seinfeld unwittingly agrees to wear this ruffled shirt for an appearance on the Today Show after asked to by Kramer’s “low talker” girlfriend. The shirt was designed by the show’s costume designer, Charmaine Simmons. The “Puffy Shirt” episode was the 66th episode and originally aired Sept. 23, 1993. It was donated to the Smithsonian Nov. 18, 2004.

Seinfeld changed the landscape of TV forever—it was the No. 1 Nielsen-rated series on television when it went off the air in 1998. Syndicated by Sony Pictures Television, Seinfeld still scores the highest rating of any off-net sitcom on television, airing on broadcast stations and TBS, with ratings higher than some series currently airing on the networks. It has been renewed for a third cycle, keeping the show on the air through 2011.

This item is one of 137 million artifacts, works of art and specimens in the Smithsonian’s collection. It’s currently not on display.