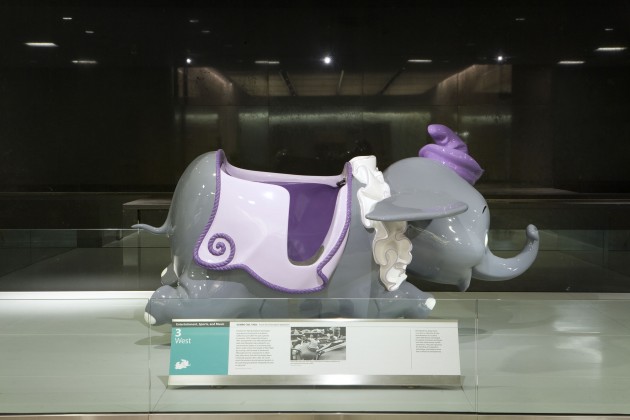 On July 17, 1955, Disneyland, the first Disney theme park and the only one created under the direction of Walt Disney, was opened to the public in Anaheim, Calif.

On June 9, 2005, this original Dumbo Flying Elephant car was donated to the Smithsonian in celebration of Disneyland’s 50th anniversary.

The Dumbo Flying Elephant ride is an original Disneyland attraction and one of the most popular rides in the park. It features music and exciting aerial views, as well as fiberglass “elephant” cars as seen in this picture. The cars include an interactive lever that allows riders to control how high they fly. Remodeled in the 1980s, the ride was inspired by Disney’s 1941 movie, “Dumbo.”

This item is one of 137 million artifacts, works of art and specimens in the Smithsonian’s collection. It is on display at the National Museum of American History.