Any adventurer, hiker or backyard naturalist with a camera can help scientists survey and hopefully save the world’s amphibians thanks to a new social networking site that links “citizen scientists” with researchers tracking the decline of amphibians around the globe.

The Global Amphibian Blitz is a new partnership between the University of California, Berkeley’s AmphibiaWeb, a comprehensive database of the world’s nearly 7,000 amphibians; Amphibian Ark; the Smithsonian Conservation Biology Institute; the Amphibian Specialist Group of the Species Survival Commission, which is part of the International Union for Conservation of Nature; the Center for Biological Diversity; and iNaturalist.org, a Bay Area social network for naturalists. (Click video below to learn more)

The website allows amateur naturalists from around the world to submit their amphibian photographs along with dates and GPS locations. The project is curated by a team of scientists who will identify and filter the submissions in search of rare species or out-of-range occurrences of interest to the scientific and conservation communities.

“The distributions of many amphibian species are so poorly known that every observation helps,” said herpetologist Michelle Koo, a UC Berkeley research scientist who helps manage AmphibiaWeb, which is hosted by the campus’s Museum of Vertebrate Zoology. 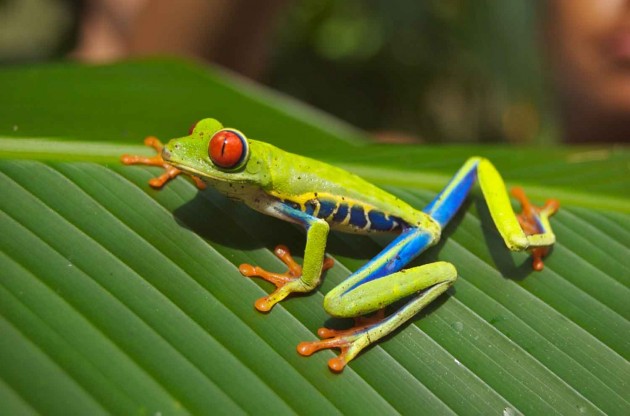 Amphibians around the world are disappearing at a rapid rate, said iNaturalist co-director Scott Loarie, who is a post-doctoral fellow in the Carnegie Institution for Science’s Department of Global Ecology at Stanford University. Recent estimates suggest that nearly one-third of all amphibians – some 2,000 species – are threatened with extinction. In the last two decades alone, nearly 168 species are thought to have gone extinct.

With increasing land use and climate change around the world, these trends are likely to worsen, Loarie said. To better understand and conserve these diverse and fascinating creatures, museums are looking for new ways to efficiently collect large quantities of information on where amphibians persist.

“The collaboration between the amateur and scientific communities is what makes this project unique and exciting,’ he said. ‘We’re not asking amateur naturalists to provide expert identifications – that’s for the scientific community to do. But by being in the right place at the right time and armed with a camera, amateurs can provide information that scientists could never dream of collecting on their own.’

“This is a social networking site for naturalists and a way to pool and share observations about the natural world for a common cause,” Ueda said. “Anyone can start a project, whether it’s counting crows nesting in San Francisco or amphibians around the world, or even keeping track of raccoons eating garbage in your neighborhood.”

Global Amphibian Blitz, the first partnership between iNaturalist and a museum, hopes eventually to census every one of the world’s surviving amphibian species, which AmphibiaWeb counts this week as 6,813.–Source: University of California, Berkeley.