Bird species in rainforest fragments in Brazil that were isolated by deforestation disappeared then reappeared over a quarter-century, according to research results published today in the journal PLoS (Public Library of Science) ONE.

Scientists thought many of the birds had gone extinct. 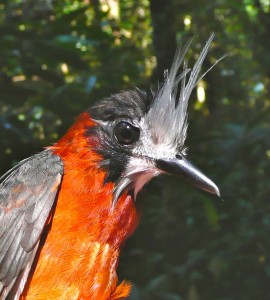 Image left: The White-plumed Antbird has gone “extinct,” then returned, several times in the forest. Click to enlarge. (All photos by Phillip Stouffer/LSU)

Lead author Philip Stouffer, an ornithologist at Louisiana State University and co-authors of the paper–Erik Johnson at the National Audubon Society; Richard Bierregaard at the University of North Carolina, Charlotte; and Thomas Lovejoy at The Heinz Center in Washington, D.C.–measured bird populations over 25 years in 11 forest fragments ranging from 2.5 acres to 250 acres in the Amazon rainforest near Manaus, Brazil. 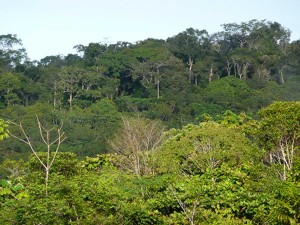 Image right: View from the edge of a forest fragment; birds regularly move through to recolonize the fragments.

In the first decade of the long-term study, birds abandoned forest fragments and, ornithologists believed, went extinct. Then in the past 20 years, many bird species returned, while others went extinct or remained extinct.

“Through long-term observations of fragmentation in tropical forests, this study provides verification that local extinction is accompanied by continual recolonization, dependent on habitat size,” said Saran Twombly, program director in NSF’s Division of Environmental Biology, which funded the research. 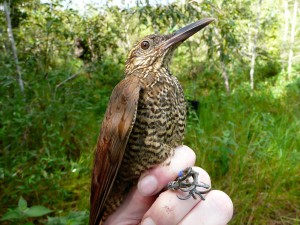 Although species loss following habitat changes can be inferred, long-term observations are necessary to accurately identify the fate of bird populations, said Stouffer.

As the project began, bird populations were tracked before the forests were cut.

During the first year after cutting, bird species disappeared in what the researchers call “localized extinction,” meaning a species has disappeared from a particular area.

The area was fragmented in “cookie cutter chunks” as a result of policies that encouraged use of the land–mostly for cattle–but required landowners to leave a portion of the area uncleared. 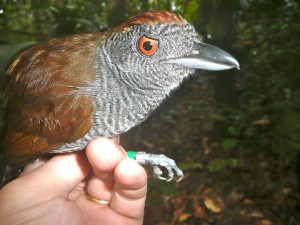 Image left: The Black-throated Antshrike may not be able to recolonize fragments of the forest.

Now agriculture has diminished, and areas where fragments meet nearby forests are recovering, Stouffer said. “Early on, the small fragments lost most of their understory birds, and the area that was cut had no forest birds at all.”

Between the time the forest fragments were created and 2007, when the most recent measurements were taken, all fragments lost bird species, Stouffer said. 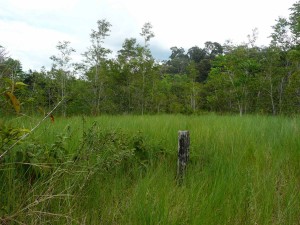 Image right: This pasture has been abandoned; its regrowth will allow some birds to return to the forest.

The extinction process started with birds leaving or dying out. Now, they’re coming back.

Of the 101 species netted–trapped with a fine-mesh “mist net”–before deforestation, the researchers detected 97 in at least one forest fragment in 2007.

“A handful of species have ‘gone extinct,’ but many more species are in flux,” Stouffer said. “They come and go.”

The project measured only understory, resident birds and not those that live in the forest canopy or may migrate.

“Our samples are snapshots in time,” said Stouffer. “They show that forest fragments have the potential to recover their biodiversity if they’re in a landscape that can rebound.

The research demonstrates some of the ways birds exist in a human-modified environment, as well as the effects of allowing a forest to regenerate.

“If we consider a balance of abandoned and returned forests–within a 20-year window–birds will begin to treat the fragments as continuous forest,” Stouffer said.

“Although a small subset of species is extremely vulnerable to fragmentation and predictably goes extinct, developing second-growth forest around fragments encourages recolonization.”

They think similar processes could be operating in other fragmented ecosystems, expecially ones that show unexpectedly low extinction rates.–Source: National Science Foundation