There is a new candidate for coldest known star: a brown dwarf with about the same temperature as a hot cup of coffee. That’s cool enough to begin crossing the blurry line between small cold stars and big hot planets. 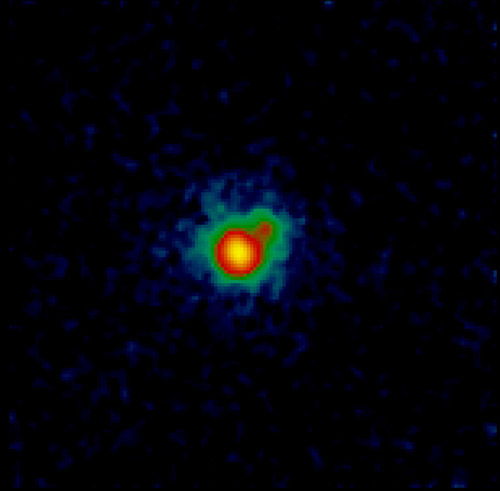 The dim glow of the binary brown dwarf system CFBDSIR 1458+10, as seen in the H-band (1.6 microns) by the Keck II Telescope’s powerful Laser Guide Star Adaptive Optics system. Field of view is 1.5 by 1.5 arcseconds wide. CFBDSIR 1458+10B is the smaller, cooler partner of the pair. Credit: Michael Liu (IfA/Hawaii), W.M. Keck Observatory

Brown dwarfs are essentially failed stars: they lack the mass and gravity to trigger the nuclear reactions that make stars shine brightly. The newly discovered brown dwarf, identified as CFBDSIR 1458+10B, is the smaller and dimmer member of a binary brown dwarf system located just 75 light-years from Earth. The pair was discovered by astronomers using the W. M. Keck Observatory and the Canada-France-Hawai’i Telescope, both on the summit of Mauna Kea in Hawai’i, following up on earlier work done at European Southern Observatory’s Very Large Telescope in Chile.

The lesser dwarf has a temperature of 370 K, plus or minus 40 K. That translates into about 200 degrees F (100 degrees C) – right around the boiling point of water on Earth’s surface.

“At such temperatures, we expect the brown dwarf has properties that are unique from previously known brown dwarfs and much closer to cold exoplanets,” said Michael Liu of the University of Hawai’i’s Institute for Astronomy. 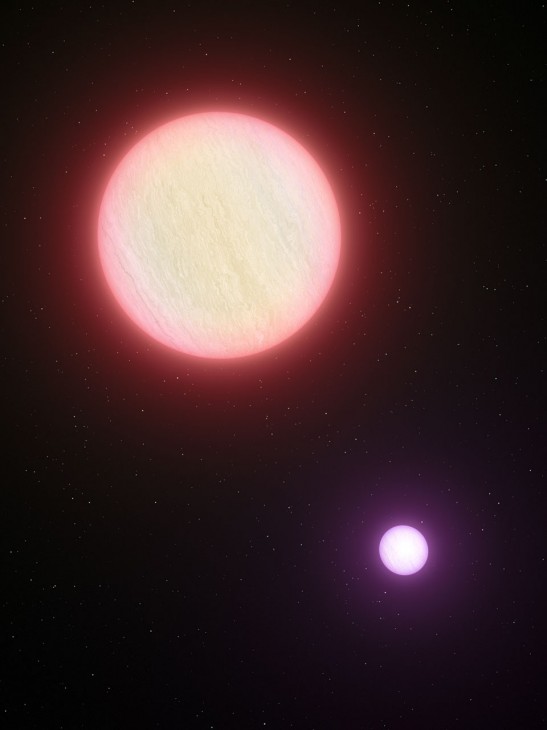 This artist’s impression shows the pair of brown dwarfs named CFBDSIR 1458+10. The colder of the two components (shown in the background) is a candidate for the brown dwarf with the lowest temperature ever found — the surface temperature is similar to that of a cup hot coffee. (Image courtesy ESO/L. Calçada) 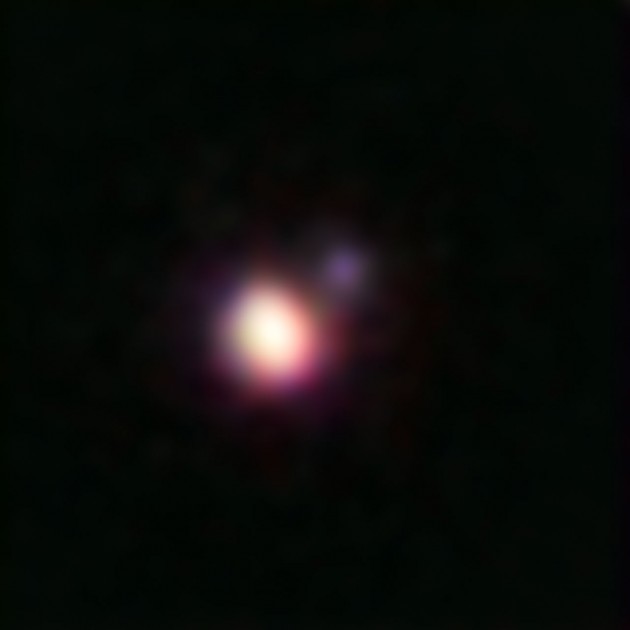 This image of the brown dwarf binary CFBDSIR 1458+10 was obtained using the Laser Guide Star (LGS) Adaptive Optics system on the Keck II Telescope in Hawaii. It was created from images taken through four different filters at near-infrared wavelengths. (Credit: Michael Liu, University of Hawaii)

“This ‘leap forward’ was made possible through the combination of both Keck and Canada-France-Hawai’i Telescope data, taking advantage of the unique instrumentation available on each,” said Trent Dupuy, former University of Hawai’i graduate student, now at the Harvard-Smithsonian Center for Astrophysics in Cambridge, Mass., and a coauthor of the paper.

Liu and his colleagues are planning to observe CFBDSIR 1458+10B in the future to better determine its properties and to begin mapping the binary’s orbit. For the latter, about a decade of monitoring should allow astronomers to even weigh the binary’s mass.

The discovery will be reported in an upcoming issue of Astrophysical Journal. The paper is available online at https://arxiv.org/abs/1103.0014.