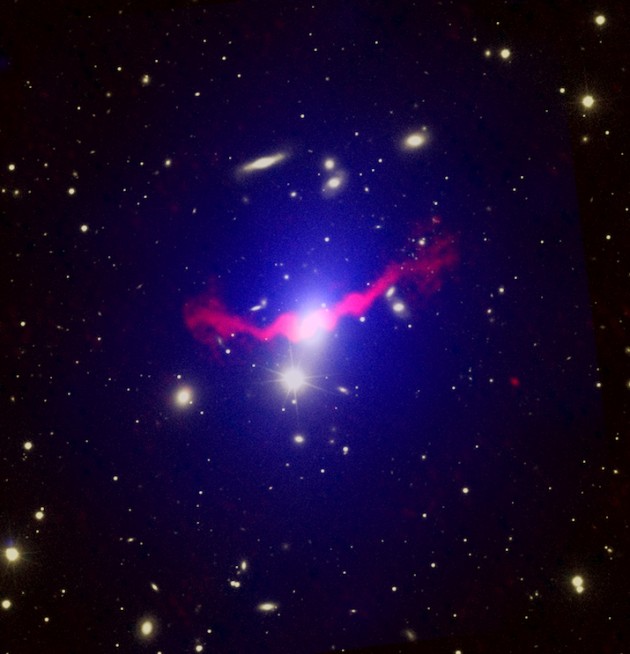 Image right: A Chandra X-ray Observatory and multi-wavelength image of a cluster of galaxies containing a massive bright elliptical galaxy (large blue glow) that is ejecting jets of material into the cluster. Blue is the X-ray, yellow is the optical, and red is the radio wavelength image. New results from Chandra find that the ejected material significantly enriches the cluster with iron and other elements.  (Credit: NASA, Chandra, SDSS, and GMRT)

Galaxies are sometimes found in large clusters with many hundreds of members. Typically there is a giant elliptical galaxy near the center; most of these ellipticals are very bright emitters of radio radiation as a result of activity around supermassive black holes at their nuclei. The environment of a black hole can also eject tremendous jets of charged particles into the rest of the cluster. How the intracluster medium is enriched by these jets, and how the energy input might affect the future development of the cluster, its galaxies and their stars, are important unsolved problems.

Smithsonian Astrophysical Observatory astronomers Ewan O’Sullivan, Simona Giacintucci, Laurence David, and Jan Vrtilek have used the Chandra X-ray Observatory to examine the hot X-ray gas in the intracluster medium around the galaxy NGC 6051, a member of a large cluster of galaxies. Jets extend out from this object about one hundred thousand light-years. The scientists find from their analysis of the X-ray data that the total of ejected material has deposited over a million solar masses of iron atoms into the cluster, among other elements, as well as energy roughly equivalent to the radiant output of the Milky Way over a million years. The astronomers conclude that the supermassive black hole at the nucleus can readily produce these impressive consequences. The results imply that the intracluster gas and presumably the galaxies in the cluster are enriched with iron and other atoms that play a key role in the chemistry, energetics, and subsequent evolution and star-formation activity of the system.