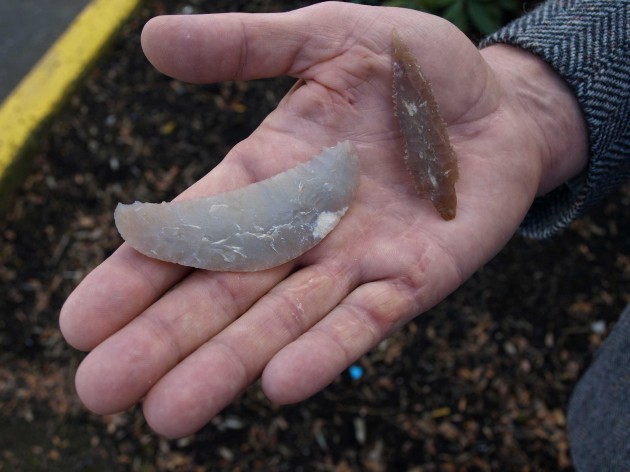 Channel Island projectile points in the hand of Jon Erlandson.

Evidence for a diversified sea-based economy among North American inhabitants dating from 12,200 to 11,400 years ago is emerging from three sites on California’s Channel Islands. Reporting in the March 4 issue of Science, a 15-member team led by University of Oregon and Smithsonian Institution scholars describes the discovery of scores of stemmed projectile points and crescents dating to that time period. The artifacts are associated with the remains of shellfish, seals, geese, cormorants and fish. The team also found thousands of artifacts made from chert, a flint-like rock used to make projectile points and other stone tools.

Some of the intact projectiles are so delicate that their only practical use would have been for hunting on the water, said Jon Erlandson, director of the Museum of Natural and Cultural History the at the University of Oregon. 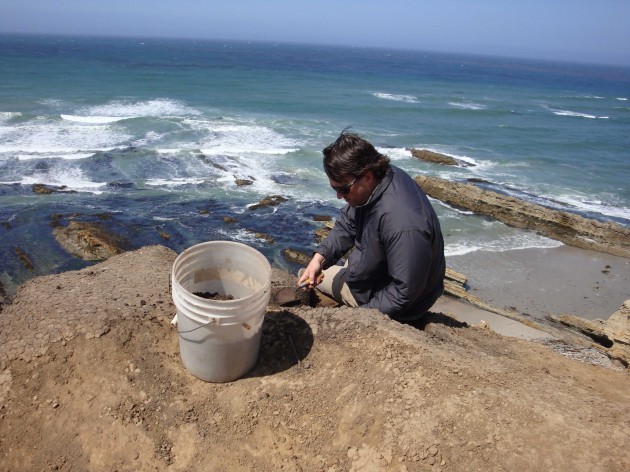 “This is among the earliest evidence of seafaring and maritime adaptations in the Americas, and another extension of the diversity of Paleoindian economies,” Erlandson said. “The points we are finding are extraordinary, the workmanship amazing. They are ultra thin, serrated and have incredible barbs on them. It’s a very sophisticated chipped-stone technology.” He also noted that the stemmed points are much different than the iconic fluted points left throughout North America by Clovis and Folsom peoples who hunted big game on land.

The artifacts were recovered from three sites that date to the end of the Pleistocene epoch on Santa Rosa and San Miguel islands, which in those days were connected as one island off the California coast. Sea levels then were 50 to 60 meters (about 160-200 feet) below modern levels. Rising seas have since flooded the shorelines and coastal lowlands where early populations would have spent most of their time.

The team has focused their search on upland features such as springs, caves, and chert outcrops that would have drawn early maritime peoples into the interior. 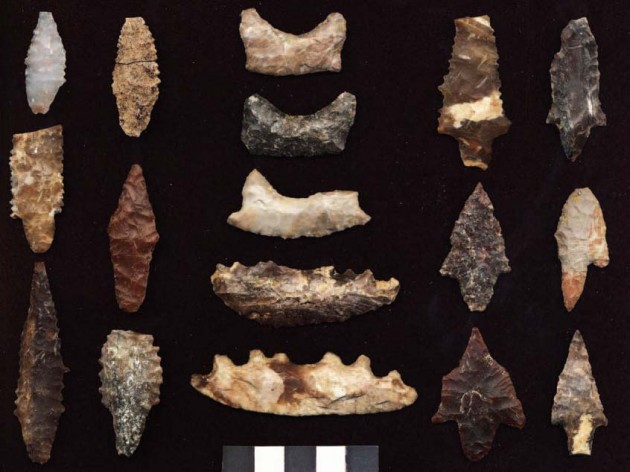 “The technology and seafaring implications of what we’ve found on the Channel Islands are magnificent,” said study co-author torben C. Rick, curator of North American Archaeology at the Smithsonian’s National Museum of Natural History. “Some of the paleo-ecological and subsistence implications are also very important. These sites indicate very early and distinct coastal and island subsistence strategies, including harvest of red abalones and other shellfish and fish dependent on kelp forests, but also the exploitation of larger pinnipeds and waterfowl, including an extinct flightless duck.

“This combination of unique hunting technologies found with marine mammal and migratory waterfowl bones provides a very different picture of the Channel Islands than what we know today, and indicates very early and diverse maritime life ways and foraging practices,” Rick continues. “What is so interesting is that not only do the data we have document some of the earliest marine mammal and bird exploitation in North America, but they show that very early on New World coastal peoples were hunting such animals and birds with sophisticated technologies that appear to have been refined for life in coastal and aquatic habitats.”

The stemmed points found on the Channel Islands range from tiny to large, probably indicating that they were used for hunting a variety of animals.

“We think the crescents were used as transverse projectile points, probably for hunting birds. Their broad stone tips, when attached to a dart shaft provided a stone age shotgun-approach to hunting birds in flight,” Erlandson said. “These are very distinctive artifacts, hundreds of which have been found on the Channel Islands over the years, but rarely in a stratified context, he added. Often considered to be between 8,000 and 10,000 years old in California, “we now have crescents between 11,000 and 12,000 years old, some of them associated with thousands of bird bones.” The next challenge, Erlandson and Rick noted, is to find even older archaeological sites on the Channel Islands, which might prove that a coastal migration contributed to the initial peopling of the Americas, now thought to have occurred two to three millennia earlier.