In fewer than 10 million years, the material in a disk surrounding a young star will either be accreted on to its star, dispersed into the interstellar medium, or converted into planets or smaller solid bodies. As the material in the disk orbits the star, each particle has a velocity that depends on its distance from the star. 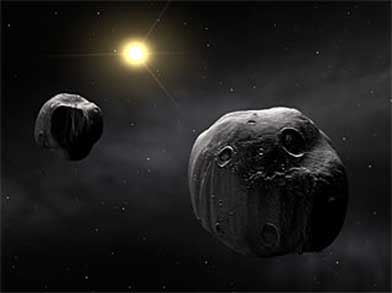 An artist’s rendering of the binary asteroid 90 Antiope, located in the outer part of the main asteroid belt between Mars and Jupiter. New research indicates that binary planetesimals in a developing, young planetary disk could significantly influence its development.  (European Southern Observatory photo)

Current models for the evolution of pre-planetary disks invoke three basic processes. In the first two, bodies interact with each other to exchange energy and alter their velocities and distances from the star. In the third, small orbiting clumps of coagulated dust grains stick to one another and grow into larger bodies, called planetesimals. The solid bodies often sculpt gaps, or cavities, in the disk, by accreting more material; some grow into planets. Eventually winds from the star will sweep away the remaining disk material. Each of these processes is influenced by many factors that astronomers are working hard to understand.

In a new paper, Harvard-Smithsonian Center for Astrophysics astronomer Hagai Perets studies the role of binary planetesimals–clumps that orbit each other and jointly mature via the three basic processes. Do such binary planetesimals even exist? And how might they influence the development of the planetary system? For example, when two bodies interact the outcome is a relatively straightforward prediction, but a third body in the mix can make the interaction notoriously complex, even chaotic, possibly leading to one of the three bodies being ejected from the system.

Perets introduces a set of relatively simple theoretical arguments to illustrate how binary planetesimals might make a very big difference to the final planetary system. He first notes the existence in our solar system today of many such binaries, and argues that some of them could be remnants from earlier times. He shows that the role of binaries, ignored in most previous studies, is not only not negligible – it potentially plays an important role in the evolution of the planetary system and should not be ignored in future simulations and modeling.