The Scarlet Knight (foreground) just before its recovery near Baiona, Spain. (Photo by Dan Crowell)

In 2009, Rutgers University Oceanographer Scott Glenn and his students successfully steered an unmanned robotic glider across the Atlantic Ocean in 221 days from Tuckerton, N.J. to Baiona, Spain. During its trip instruments aboard the yellow 7-foot, battery powered glider recorded data on the currents, salinity and temperature of the ocean’s waters. The Rutgers had modified the coastal glider so it could make the long, trans-Atlantic trip. 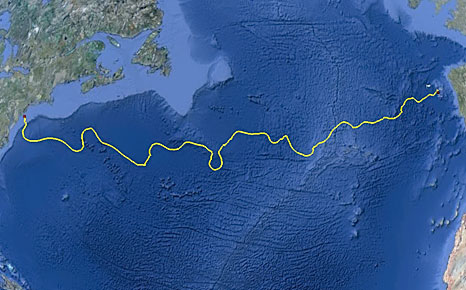 The Scarlet Knight, as the glider is called, made nautical history as the first submersible glider to successfully cross the Atlantic Ocean. With no propellers these gliders move forward ocean by rising and falling with changes in their buyoancy.  Every eight hours the glider surfaced to check its GPS position and send back data. E-mails from technicians in a control room at Rutgers University guided the craft toward Spain.

On Thursday, Dec. 9, the submersible was added to the collections of the Smithsonian’s National Museum of Natural History and is on exhibit in the museum’s Ocean Hall. The glider’s successful journey illustrates the promise for these gliders as tools for long-term scientific research and exploration of the oceans of the world.