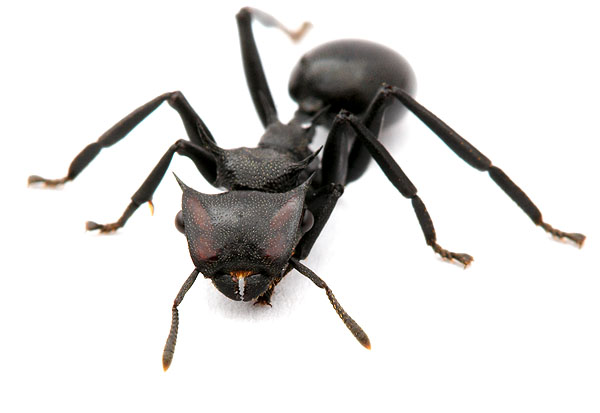 Storms, predators and other forces regularly knock arboreal ants out of their trees. Rather than falling straight down however, the wingless tropical ant Cephalotes atratus glides backwards as it falls. It steers in a directed descent that lands it on the trunk of the tree from which it fell—saving these insects from reaching the hostile and unfamiliar terrain of the forest floor. C. atratus lives in Central and South America from Panama to Argentina.

Recently a team of researchers working at the Smithsonian’s Tropical Research Institute in Panama, decided to try and learn for the first time just which body parts these ants use to steer themselves as they glide. Using high speed cameras to film ants dropped in the forest and from a high outdoor balcony, the scientists studied ants which had various body parts removed–the gaster (the bulbous back end of the ant) and one or both mid-legs and hind legs. Watching the ants as they fell, the researchers recorded which ants had the greatest success in steering and landing on a vertical column. They also recorded the velocities and angles at which the ants glided and the positions of their legs.

This video demonstrates the difference between the fall of a non-gliding ant and the directed glide of C. atratus.  (Courtesy Steve Yanoviak) 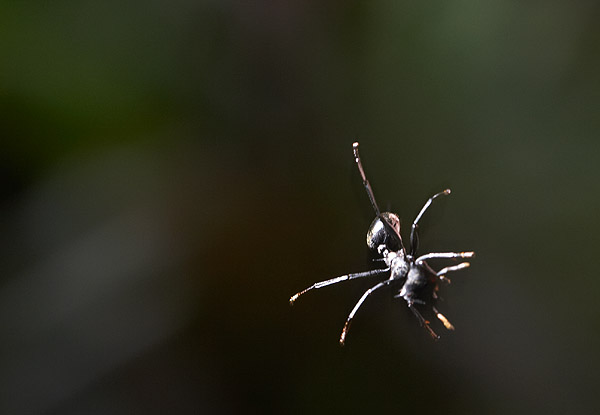 As an ant of the species C. atratus falls, it extends its legs to guide its flight and grab nearby vegetation. (Photo by Alex Wild)

The team learned that ants with one or both of their hind legs removed had the least success in directing their descent. While the elongated hind legs of C. atratus are an effective aerodynamic surface by which to steer their bodies while gliding, the scientists determined the ants also need their hind legs to right themselves early in their fall. Both of these factors contributed to the drop in the success of a directed glide when the hind legs were missing. 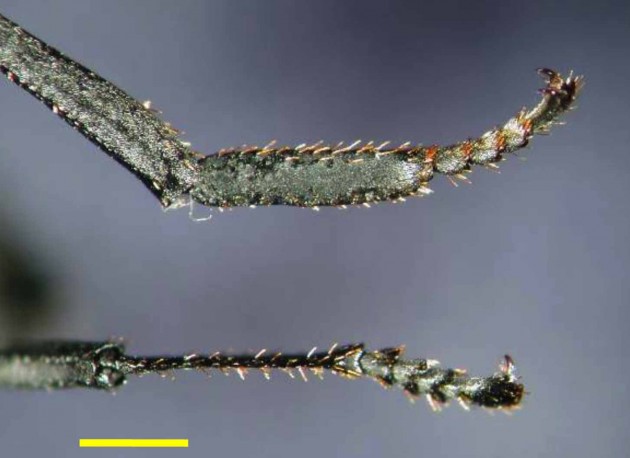 This close-up of the hind legs of a gliding ant shows the flattened aerodynamic qualities of the legs.

Overall, the scientists observed that regardless of which appendages were removed, C. atratus ants dropped from high places remained remarkably successful in guiding their glides. The biomechanics of the flight of these ants is too complex to solve in a single experiment. “Only a three dimensional analysis of maneuvering ants can assess the relative importance of the legs, abdomen and even possibly head motions during steering,” the researchers concluded. The scientists are currently working on a three dimensional study of the glides of C. atratus.