Should global warming cause sea levels to rise as predicted in coming decades, thousands of archaeological sites in coastal areas around the world will be lost to erosion. With no hope of saving all of these sites, three archaeologists—Leslie Reeder of Southern Methodist University, Jon Erlandson of the University of Oregon and Torben Rick from the Smithsonian’s National Museum of Natural History—have issued a call to action for scientists to assess the sites most at risk around the world. 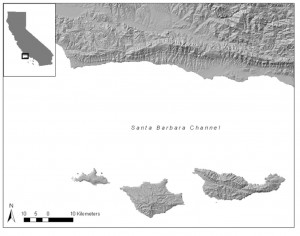 Writing in the Journal of Coastal Conservation and using California’s Santa Barbara Channel as a case study, the researchers illustrate how quantifiable factors such as historical rates of shoreline change, wave action, coastal slope and shoreline geomorphology can be used to develop a scientifically sound way of measuring the vulnerability of individual archaeological sites. They then propose developing an index of the sites most at risk so informed decisions can be made about how to preserve or salvage them. 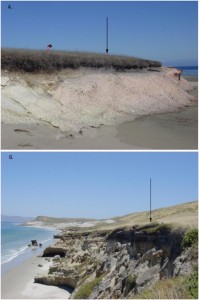 Urban development, the researchers point out, also is a significant threat to the loss of archaeological data. Coastlines have long been magnets of human settlement and contain a rich array of ancient archaeological sites, many of which have never been excavated. Urban development is projected to remain high in coastal areas, representing a significant danger to undisturbed sites.

“Thousands of archaeological sites—from large villages and workshops to fragmented shell middens and lithic scatters—are perched on the shorelines and sea cliffs of the Santa Barbara Channel,” the researchers point out. “The archaeological record is never static, and the materials left behind by one generation are altered by the people and environment of the next. However, increasing threats form modern urban development, sea level rise and global warming are poised to increase this steady pattern of alteration and destruction.”

The vulnerability of sites in the Santa Barbara Channel is generally lower than sites located along more open, more gently sloped or unstable coastlines, such as the Atlantic and Gulf coasts of North America. 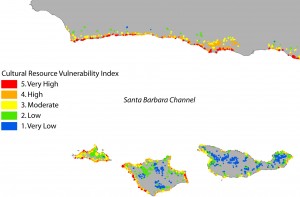 Measuring threats and identifying vulnerable sites is not an end in itself, the researchers say. “We must find ways to act…by quantifying those sites most vulnerable to destruction, we take a first step toward mitigating the loss of archaeological data and the shared cultural patrimony they contain.”

Click here to access the paper “Our disappearing past: A GIS analysis of the vulnerability of coastal archaeological resources in California’s Santa Barbara Cannel region.”

Click here to read the editoral by Jon Erlandson “Racing a Rising Tide: Global Warming, Rising Seas and the Erosion of Human History.”