Amazon farmers who vanished centuries ago were remarkably innovative 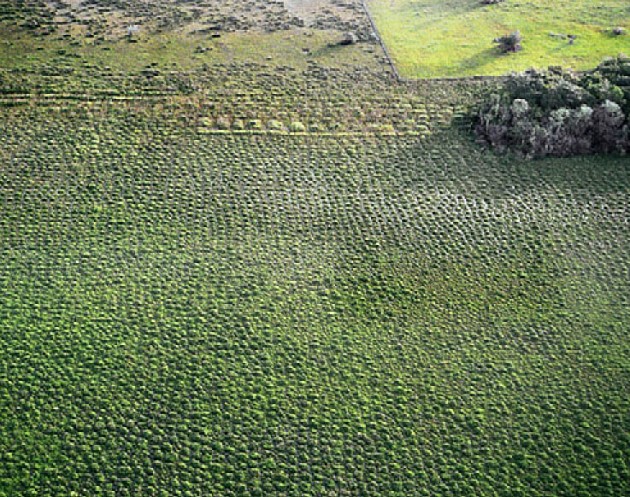 A pre-Columbian raised field in French Guiana filled with small, round mounds for growing crops.

Little is known about the long-vanished Arauquinoid, an Indian culture that thrived centuries ago in French Guiana, other than they were innovative farmers. The Arauquinoid were gone long before Columbus landed in the new world, yet what archaeologists and other scientists have recently learned about their farming methods comes through the auspices of some unlikely collaborators—ants, termites and earthworms. In addition, what scientists are learning about Arauquinoid farming methods may have important implications for today’s sustainable farms.

Centuries ago these natives grew maize, manioc and squash upon a matrix of raised beds in flat, regularly flooded coastal marshes. Scooping slices of topsoil from the marsh they flipped them together and upside down, creating mounds which they topped with soil from other areas. Crops were planted, tended and harvested on this matrix of small islands. 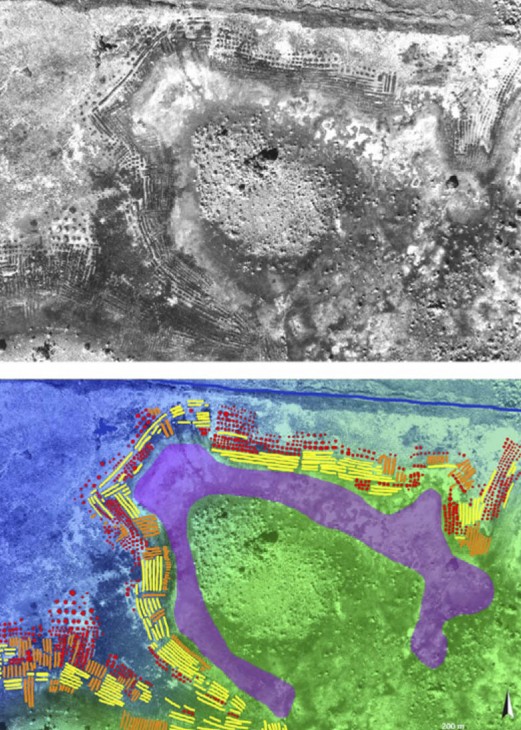 The aerial photograph at top shows different types of raised fields in a complex in French Guiana. The bottom image is an interpretation of  these earthworks based on stereoscopic ananlysis and field studies.

Using aerial photographs, researchers have recently located a number of long abandoned “fossil” agricultural fields used by the Arauquinoid in coastal French Guiana. Follow-up examination of the soil and associated fragments from cooking implements, done in part by scientists at the Smithsonian Tropical Research Institute in Panama, have revealed microscopic starch grains from corn and manioc.  Squash phytoliths also were recovered from soil analysis.

This new research has revealed that in areas considered unsuitable for farming today, “pre-Columbian farmers constructed thousands of raised fields in the seasonally flooded coastal savannas of the Guianas,” scientists write in a paper published recently in the Proceedings of the National Academy of Sciences. “They built conspiciuous earthworks, including raised fields, canals and ponds, that enabled them to practice intensive permanent agriculture in this low-lying region with highly seasonal rainfall.”  The study combined archeology, archeobotany, paleoecology, soil science, ecology and aerial imagery and was carried out by scientists from a number of organization, including the University of Bayreuth in Germany, the University of Montpellier II and Centre d’Ecologie Fonctionnelle et Evolutive in France, the University of Exeter, and the Smithsonian Tropical Research Institute in Panama.

In a region that receives on average four meters of rain each year, scientists were puzzled why the mounds have not eroded into obscurity over the centuries. They discovered that ants and termites, living in the raised mounds since before they were abandoned by the Arauquinoid, have continually rebuilt them with large quantities of new organic matter. Earthworms, attracted to this rich soil, kept the mounds porous, allowing rain to percolate through without washing them away. Grasses and other plants keep the mounds stable. A survey of the ants and termites in these former agricultural swamps, revealed that their nests occur entirely on the mounds, with none in the low, often submerged, areas surround them. 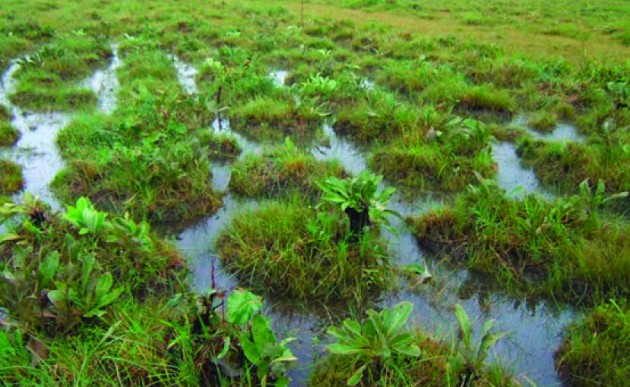 A matrix of raised mounds in an abandon field in a part of French Guiana named Savane Grande Macoua. Only the mounds are above water level.

Researchers now speculate that as the fertility of the mounds decreased with continued crop growing, these ancient farmers may have let their mound-matrix fields lay fallow, allowing ants, termites and worms to replenish the soil’s nutrients. This largely forgotten practice of growing crops in marshes and allowing ecological engineers such as ants and termites to replenish nutrients is a technique that may have practical uses in modern sustainable farms, the researchers write.