By Jessica Porter and John Barrat

The Smithsonian’s National Museum of Natural History recently acquired the remains, clothing and coffin of William Taylor White, a 15-year-old boy who was buried in Washington, D.C. in 1852. His coffin was unearthed in Washington’s Columbia Heights neighborhood in April 2005 during a construction project at an apartment building. 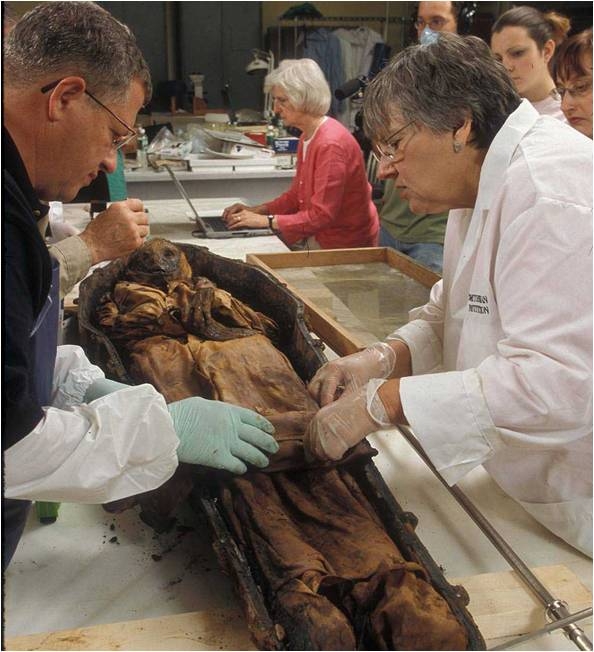 Anthropologists at the Smithsonian’s National Museum of Natural History clean and measure the body of William White after his coffin was opened. (Photo by Chip Clark)

White, who was a student at Columbian College from Accomack County, Va., died of pneumonia and complications from a mitral heart defect. When his coffin was unearthed, his identity was a deep mystery. Only through the diligent work of a multi-disciplinary team of Smithsonian staff, student interns and external specialists was White’s identity finally established. After a number of blind leads the team was able to track down White’s living relatives through historical records. They then used DNA analysis to confirm that the designated relatives were indeed related to White.

White’s relatives erected a headstone for him at a family cemetery on Virginia’s Eastern Shore and donated his remains, clothing and coffin to the Natural History Museum’s Department of Anthropology.

“The results of the multidisciplinary and collaborative research that led to the identification of William T. White is a testament in the interaction of the Smithsonian departments and the abilities of the experts involved,” says David Hunt, collections manager of the Physical Anthropology Division at the Natural History Museum.

“The addition of this accession to the Natural History Museum’s Anthropology Department fills a void for pre-Civil War iron coffin types and the remains of a documented known age and sex sub-adult skeleton,” Hunt says. “This acquisition is a ground-breaking addition to the Smithsonian collection and will further promote Smithsonian research.”