The Smithsonian Institution’s Environmental Research Center on the Chesapeake Bay is taking the lead on a new five-year, $5 million collaborative study of the degradation of nearshore coastal habitats in the Chesapeake and Delaware Bays. Funded by an initial $946,000 grant from The National Oceanographic and Atmospheric Administration, collaborators in the project include the Smithsonian, the Virginia Institute of Marine Sciences, the University of Maryland Center for Environmental Science, the Maryland Department of Natural Resources, the University of Delaware, Pennsylvania State University and the United States Geological Survey.  Findings from the study will be used by environmental managers to protect and restore these estuaries over the long-term, as well as plan for sea level rise and other consequences of climate change.

Invasive species, contaminants, excessive nutrient’s and sediment are just some of the many factors threatening sensitive wetlands and seagrass beds. An additional issue has been community efforts to “harden” shorelines by lining shores with bulkhead, rock or rubble to try to protect adjoining lands against erosion and sea level rise. These structures can threaten the health of living shorelines, such as wetlands and marshes. This project will look at the combined effects of these multiple stresses on nearshore habitats and their dependent species. 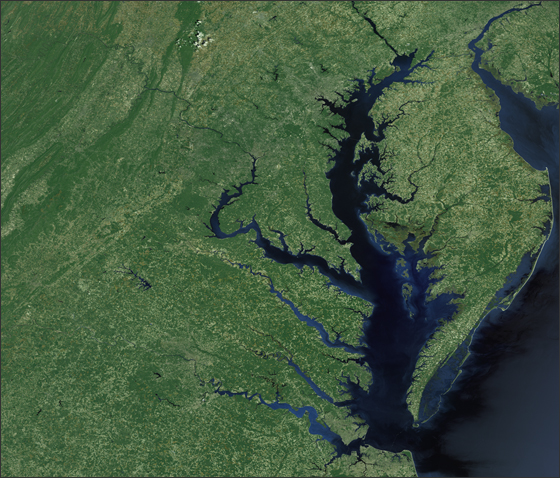 Image: A satellite view of the Chesapeake Bay.

“These habitats which are nursery and feeding grounds for so many species, have typically been managed in a piecemeal, parcel-by-parcel fashion and are slipping away in areas of heavy development,” said Robert Magnien, director of the NOAA National Centers for Coastal Ocean Science’s Center for Sponsored Coastal Ocean Research, which awarded the grant. “Developing scientific information that ties multiple species and their environment will be used to advance management approaches.”

The Smithsonian Environmental Research Center leads the nation in research on linkages of land and water ecosystems in the coastal zone and provides society with knowledge to meet critical environmental challenges in the 21st century.