Astrophysical Observatory scientists are monitoring the mysterious movements of glaciers

In southeastern Greenland, two rivers of ice named Helheim and Kangerdlugssuaq flow in spurts and starts toward the coast. They are much like any other glacier, except each carries a network of scientific instruments that monitor their movements to the millimeter.

Geodesist James Davis, of the Smithsonian Astrophysical Observatory, in Cambridge, Mass., and his colleagues have watched the two glaciers since 2006. Their goal is to learn the details of how the glaciers move, and how they interact with earth and ocean in cycles affected by tides, temperatures, and a flock of other factors. 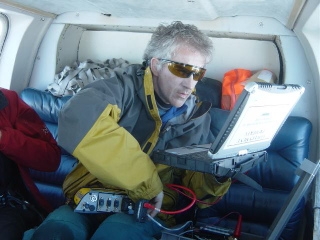 “I’m interested in getting a rich picture of what these glaciers are doing over several years,” Davis says. “We’re after details.”

And when he says details, he means it! The team uses a set of Global Positioning System receivers to gather data. You may be familiar with GPS as location guides for cars, hikers, and airplanes. A typical GPS is accurate to about three feet. Davis uses special receivers and analysis techniques to reach an accuracy of a fraction of an inch.

Davis is among a long line of Smithsonian scientists who have used space techniques to measure the properties of the Earth, such as its size, shape and the strength of its gravity field. In fact, Davis points out “the first models of Earth were developed in the 1960s at the Smithsonian Astrophysical Observatory, and are called the Smithsonian Standard Earth.”

The aim of modern geodesy is to study the dynamics of the Earth system, including the solid Earth, oceans, atmospheres, and cryosphere—glaciers and ice sheets. “The Smithsonian Astrophysical Observatory has played a leading role in this transformation of geodetic science,” Davis says.

Getting the equipment to the glaciers is no easy task. Everything has to be flown to the site. Helicopters are used for the last leg of the journey because glaciers aren’t smooth; they have cracks and crevasses that make it dangerous to land. 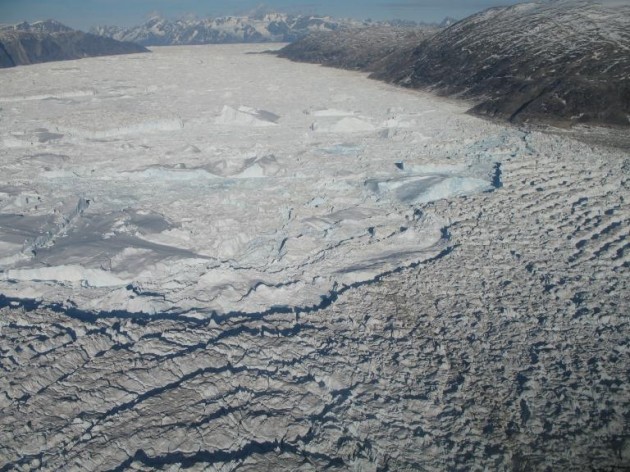 The scientists set up the GPS receivers quickly, then leave them throughout the summer to record data. Then, they pick up the equipment and take the data back to the lab to analyze.

“We want to take data during the winter too, but the conditions become incredibly harsh,” Davis explains. “Power is an issue since we use solar power and the glaciers don’t get much sun during the winter at Arctic latitudes.”

Their efforts have uncovered some surprises. A glacier’s movement can change rapidly, speeding up or slowing down over a period of minutes. In particular, a glacier tends to speed up when it calves – that is, when a chunk of ice at the coast breaks off. In some cases, that “chunk” may be a mountain of ice four miles long and a third of a mile wide.

In separate studies, seismographs have detected rumblings that researchers dubbed glacier earthquakes. Davis and his colleagues found that all three – speeding up, calving, and seismic events – tend to happen at the same time. They are inter-related for reasons still unclear. 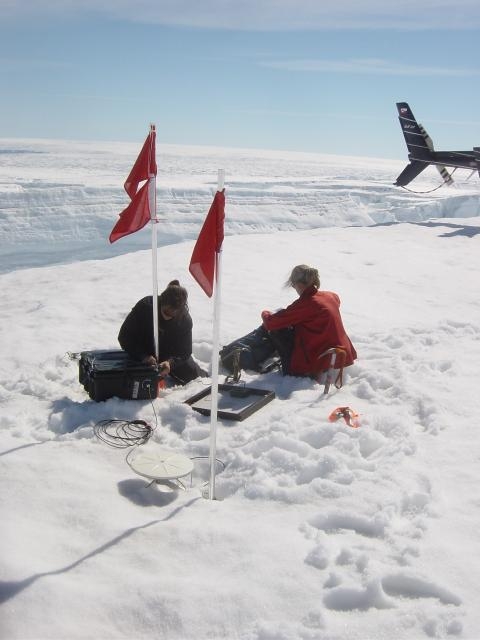 Photo: Smithsonian Astrophysical Observatory staff install a GPS station on Helheim Glacier. The GPS antenna is the round, white disk in the foreground. Flags are used to relocate the site at a later date. (Photo by G. Hamilton)

This summer marks the fourth year of monitoring for Helheim, and the second year at Kangerdlugssuaq. The team has funding from the National Science Foundation through 2010, but they hope to find additional funds to continue their work.

“There’s so much we still don’t understand,” Davis says.

Davis’s colleagues on the project are M. Nettles and G. Ekstrom of Columbia University; G. Hamilton of the University of Maine; and researchers at the institute for Space Sciences in Spain and the Danish national Space Center.