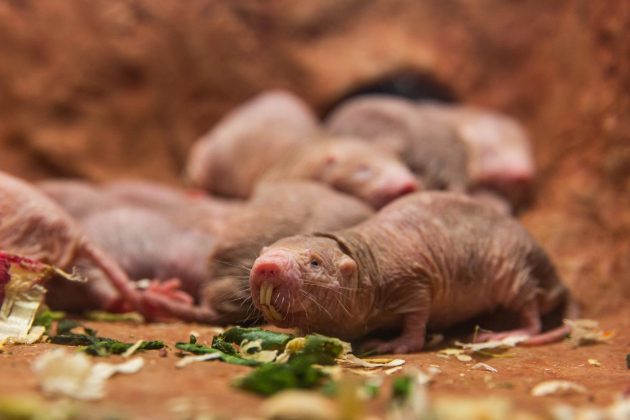 Every queen deserves a castle, and the ruler of the Smithsonian’s National Zoo’s naked mole-rat colony is no different. After 27 years in a maze of transparent plastic tunnels, the queen and her subjects—the naked mole-rat colony—are moving into a more naturalistic exhibit that not only mimics their underground world in the wild, but also gives their adoring public more ways to admire their strange little lives.

For naked mole-rats, wrinkles are ageless

At more than 30 years old, a life span unprecedented among small rodents, several of the Zoo’s elderly naked mole-rats needed some creative design ideas from exhibit architects to help them get around their new mansion.

The curators at the National Zoo’s Small Mammal House have been working with the builders at the Zoo’s workshop for more than a year to test and refine the design of the new exhibit. The new mole-rat mansion has four separate levels, so the design team needed to ensure that the most geriatric of the colony can make it up and down the new tunnel ramps.

“We initially started with the tunnels at a 45-degree angle. Most could scurry up it but some of the older naked mole-rats would get to the top and at the last second be like ’oh I can’t make it’ and slide back down,” explains Pat Rizer, the Zoo’s exhibit and fabrication specialist.

“So as soon as we realized that didn’t work we went to a 30-degree angle. When we put that ramp in, within an hour they all started going up and down,” Rizer says. 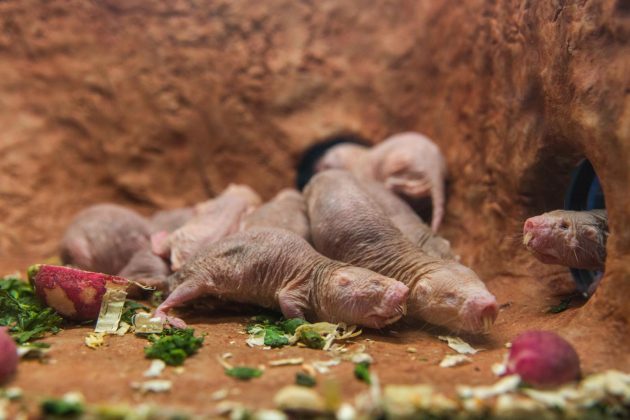 Get ready to stream your new favorite docu-drama

Move over panda cam, naked mole-rat live streaming is going to be a big internet hit. On Aug. 31, the National Zoo will launch a new high-definition color webcam that will run 24 hours a day.

Both local and international naked mole-rat fans will be able to enjoy the antics of this captivating colony as they scurry around their tunnels doing their queen’s bidding.

This web series has sex, intrigue and power struggles.

Unlike most mammals on the planet, naked mole-rats have developed a rigid society that has more in common with ants or bees. At the top is a queen. She is the mother of all the naked mole-rats in the colony, which may total a few dozen or a few hundred—the National Zoo has a colony of 17. She breeds only with a few chosen males.

Keeping the rest of the colony from mating takes a lot of intimidation. Naked mole-rats are some of the most prolific mammal breeders in the world, having more than 30 babies per litter every two to three months, so colonies can balloon in size quickly. And as the colony grows, a queen’s influence can wane, giving rise to a rival queen. 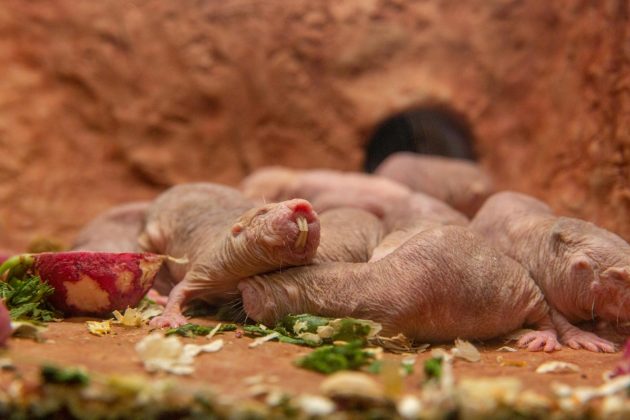 “It’s not like with insects where you have an egg that’s created to be the queen once it emerges,” Kerns says.

How does a new female naked mole-rat become a queen? She just has to go up to the current queen and kill her.

“When the queen is very prolific the colonies will split because a new queen will show up on the outskirts of the colony,” Kerns says.

Naked mole-rat cam will not become the next “Game of Thrones” with a battle of the queens. The new exhibit will allow keepers to separate the two and keep them from fighting.

“If we have two queens in different parts of the exhibit we will be able to close them off from one another using doors we have designed in the new tunnels. That flexibility will be really helpful in the new exhibit,” Kerns says. 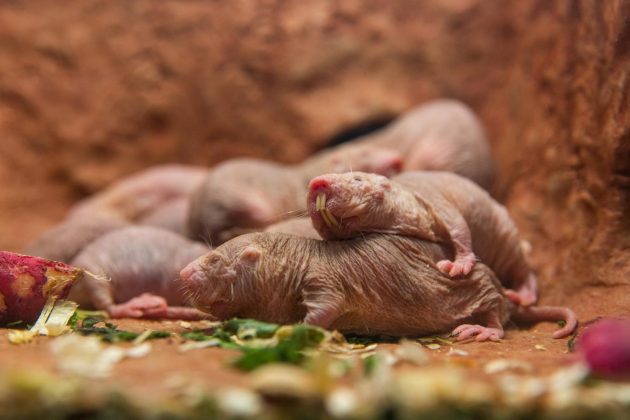 To the naked eye, pun intended, it can be hard to tell who is who in a naked mole-rat colony. In the new exhibit, microchip technology will give us insight into their hierarchal world.

“Each naked mole-rat had a microchip and in the new exhibit we have a microchip reader,” Kerns says. “So, every time one of the mole-rats runs through a certain tube the microchip reader will display the information about that animal.”

Visitors will not only be able to identify each animal’s age and sex, but might also learn their role in the naked mole-rat society.

There are many different jobs for the workers of the colony. Soldiers are drafted to protect the colony from rival naked mole-rats and predators. Other workers tend to the young, clean burrows, dig tunnels and look for food. 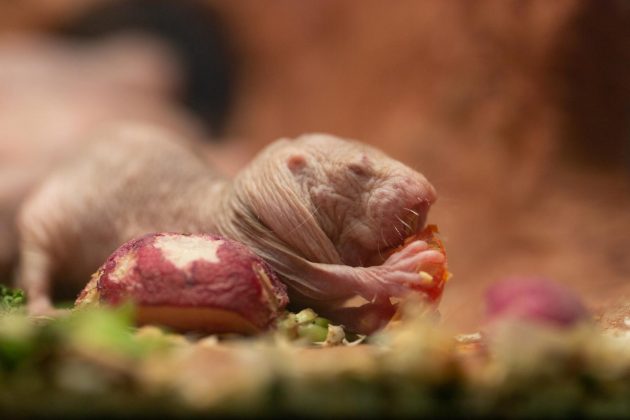 Just because there is little digging to be done in their new mansion doesn’t mean there will be no work to do.

“We take their food—sweet potato, carrot, other tubers—and jam it into the tunnels so that they have to gnaw through. This is enriching for the animals because that’s exactly what would happen if another animal tunneled through their habitat during the middle of the day,” explains Kerns. “It also helps them keep their teeth ground down.”

Even with the tunnels, the new exhibit won’t close off the animals from visitors.

“Our new exhibit is naturalistic on one side but when you turn the corner you’ll still see the same behind-the-scenes aspect with the transparent tubes,” Kerns says.

That way you’ll always have an opportunity to see the naked mole-rats in all their glory.

The new naked mole-rat exhibit opens to the public Sept. 1.