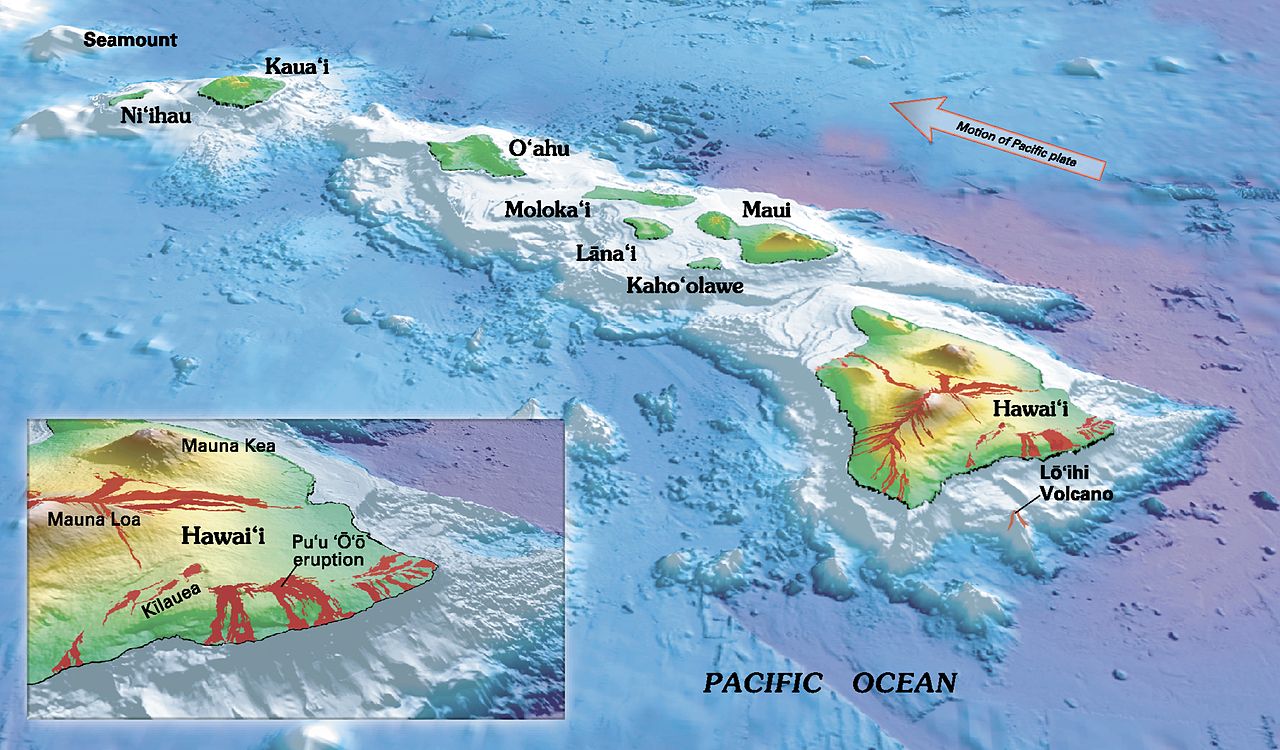 To get a better idea of just what is going on with the current volcanic eruption of Kilauea on the island of Hawaii, take a look at a topographic map of the island.

Richard Fiske, geologist emeritus at the Smithsonian’s National Museum of Natural History, says topography—charting the land’s surface shapes and features—reveals this island contains a huge ridge that extends about 50 miles east of the summit of Kilauea to the island’s eastern tip and then for many more miles underwater.

This ridge was built by thousands of eruptions, the same type that have happened at Kilauea this spring.

Compilation of three short videos from helicopter overflights of the fissure complex, in Kīlauea Volcano’s lower East Rift Zone on May 22, 2018. Fissure 22 is the dominant fissure, with lava fountaining to about 160 feet or more in height. (USGS video)

“Eruptions take place repeatedly along and near the crest of this ridge—both on land and along the submarine extension of the ridge and have done so for thousands of years,” Fiske says.

Kilauea’s summit area receives about 70 inches of rain each year and much of it percolates underground to form an extensive water table. When the lava level in Kilauea’s crater lowers, water from the surrounding water table can seep into the crater, triggering violent steam explosions. These explosions can throw rocks, some more than a foot in diameter, far out of the crater.

“When this occurs, it can be quite dangerous to be within a mile or so of the crater,” Fiske says.

Details of the dramatic changes occurring within Halema‘uma‘u crater at Kīlauea’s summit can be seen in this May 31 video. Clearly visible are steep and overhung crater walls, new cracks and faults that reflect ongoing subsidence and intense steaming from a new collapse pit on the north margin. (USGS video)

Hawaiian volcanoes such as Kilauea are different in many ways from volcanoes in other parts of the world, mainly because the source of their magma originates from a “hot spot” deep beneath Hawaii’s crust. This hot spot releases magma that rises through the region’s tectonic plate—somewhat similar to a welding torch burning a hole through a piece of steel. The origin of the hot spot is unknown. 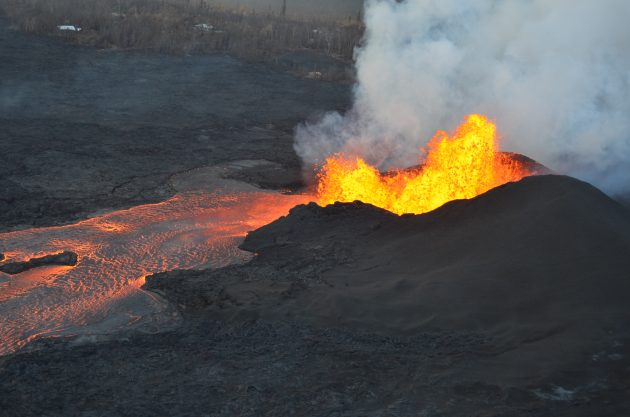 Lava fountaining continues at a fissure from Kilauea in this photo taken on June 5, 2018. The fountain has built a 115-foot high cone, and an actively-growing spatter rampart on its eastern side. The lava channel leading from the cone is full to its banks. (USGS image)

The motion of the Pacific Plate carries the Hawaiian Islands northwestward at the rate of about 2.7 inches a year. Over hundreds of thousands of years, plate motion carries active volcanoes away from the hot spot making them less active and eventually causing them to become extinct.

“A new volcano is currently growing on the sea floor south of Kilauea. It’s not an island yet but it is growing down there,” Fiske says. “We anticipate this small submarine volcano will eventually grow to become a small island off the south coast of the Island of Hawaii. Further growth will cause it to merge with the big island, causing it to become even larger!” 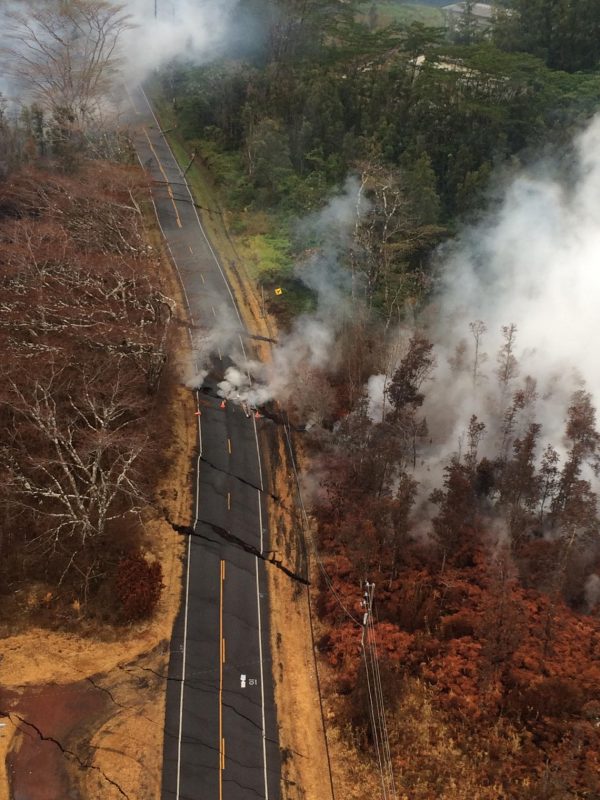 Aerial view of ground cracks at an eruptive fissure area on Pohoiki Road taken on May 17 near Kilauea volcano. These cracks are caused by below-the-surface intrusion of magma into the lower East Rift Zone. Cracks open and widen, some with horizontal and vertical offsets, as the magma pushes in. (USGS image)

Magma travels from Kilauea’s summit along the ridge from the volcano’s crater, on the surface and underground.

“Underground it creates steeply dipping vertical channels that fill with magma called dikes,” Fiske says. “Dikes can be only a few feet thick and as much as half-a-mile high and are shaped like extremely long, horizontal sword blades. Tensions at the top of a dike can split the ground surface and produce fissures that permit lava to erupt.”

The sudden appearance of erupting fissures near Kilauea this spring has destroyed houses and properties along the volcano’s east rift zone. 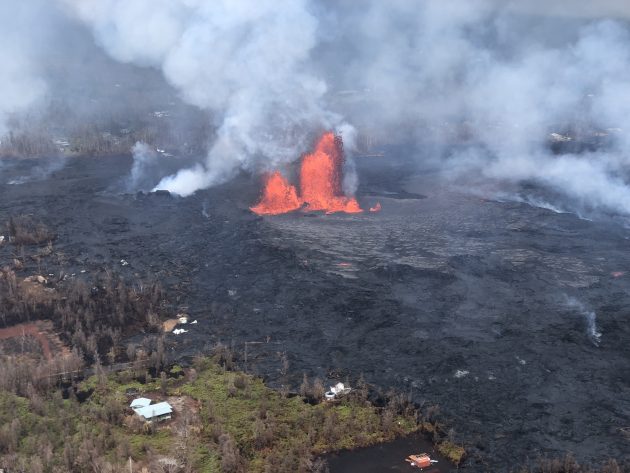 A Kilauea fissure spews lava on the afternoon of May 28. At times, lava fountains were reaching heights of 200 feet and feeding a lava flow that advanced to the northeast. (USGS image)

“Many areas on the Island of Hawaii are perfectly safe places to build a home,” Fiske says. “The U.S. Geological Survey has published maps showing volcano hazards in Hawaii, and hazardous areas are well identified.”

Looking at the situation in a broader perspective, the huge East Rift Zone ridge, and the thousands of ancient lava flows it contains is evidence that future eruptions will continue to occur.

Get answers to your volcano questions and explore a database of 10,000 years of eruptions on the Smithsonian’s Global Volcanism Program website.