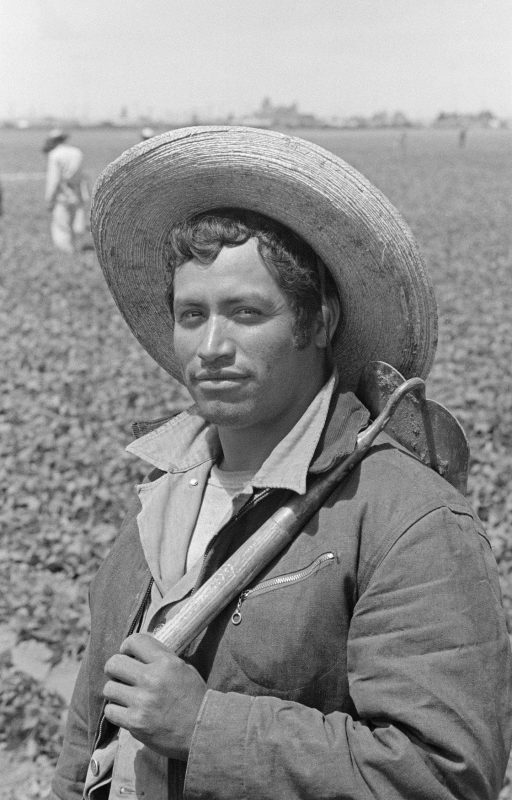 A bracero with a short-handled hoe over his shoulder stands in a California field, in 1956.

Millions of Mexican workers came to the United States in the mid-20th century through a program that has shaped and changed American labor and American communities to this day.

Their story is told in a traveling exhibition, “Bittersweet Harvest: The Bracero Program, 1942-1964” which has opened and closed in 46 cities in 22 states across the U.S. since its 2009 premiere at the Smithsonian’s National Museum of American History in Washington, D.C. This bilingual exhibition from the Smithsonian Institution Traveling Exhibition Service examines the experiences of an estimated 2 million braceros, a term used in Mexico for manual laborers, who came to the U.S. between 1942 and 1964 to fill labor shortages in agriculture and the railroads caused by World War II. 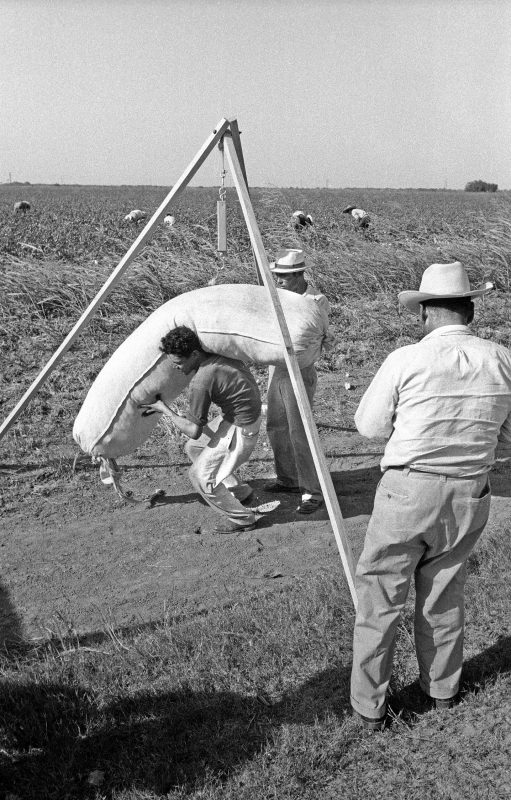 A bracero in a field near McAllen, Texas prepares to weigh a sack of cotton in 1956. Braceros worked fields of cotton, citrus, dates and such backbreaking crops as sugar beets, lettuce and strawberries. (Photo by Leonard Nadel/Courtesy Smithsonian’s National Museum of American History)

Laura Rafaty, executive director of the Napa Valley Museum, says it’s a fitting location: “There could be no better place to host the final stop of the Smithsonian’s touring braceros exhibit than here in the Napa Valley, where so much of the braceros story was written, where the lessons of past contract worker programs are so relevant, and where the braceros legacy is so positive, enduring and profound.”

Bittersweet, the bracero experience is a story of both exploitation and opportunity, and it’s an important part of American history that contributed to shaping the nation. Small farmers, large growers, and farm associations in California, Arizona, New Mexico, Texas, Arkansas and 23 other states hired Mexican braceros to provide manpower during peak harvest and cultivation times during this period. 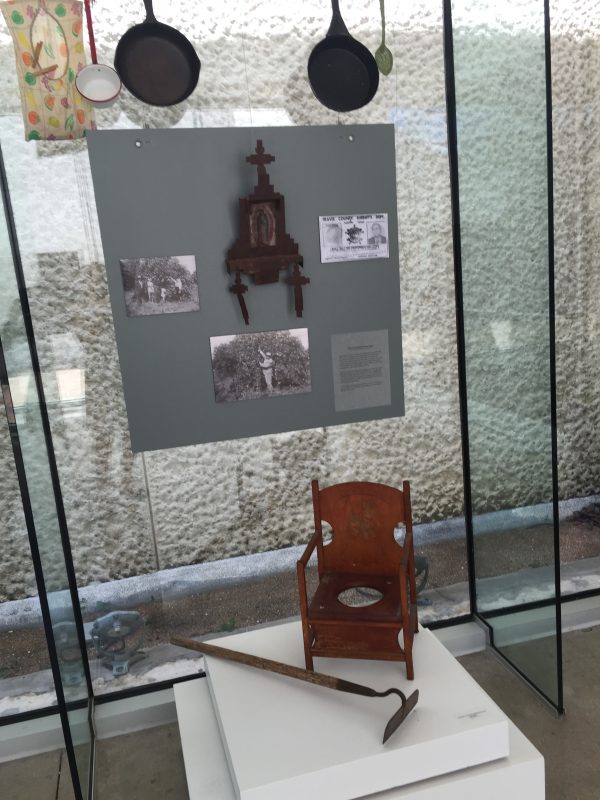 “Many members of Napa’s Latino community, which accounts for a third of the county’s population, trace their roots to the bracero program,” explains Sandra Nichols, a cultural geographer at Napa Valley College. “Napa growers were desperate for farm labor during and in the years after the war.”

“At that time, Napa Valley’s fruit orchards and row crops were giving way to vineyards and there was a growing need for workers, with not enough locals to meet the demand,” Nichols adds. “Men who came as braceros were hired for year-round work with Napa grape growers and winery owners, and as the industry expanded, employers turned to these trusted employees to recruit others. The braceros recruited their relatives, friends and hometown neighbors, who in time brought their families to Napa, leading to a growing Latino community and continuing demand for their labor.” 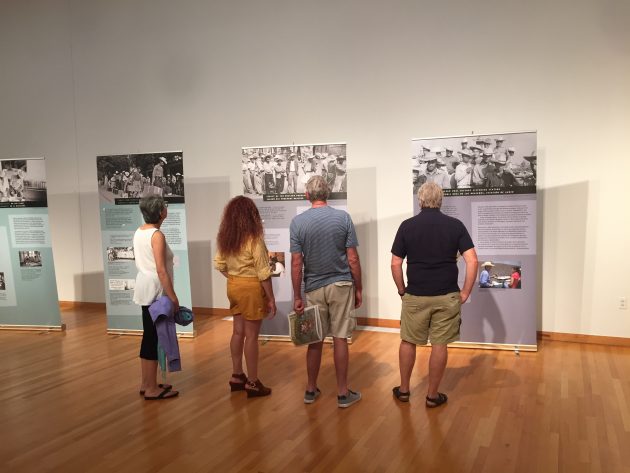 “These four Mexican towns—Timbinal, El Grullo, Indaparapeo and Los Haro—were regions from which many braceros came to the U.S. during the program,” Nichols says. “Hundreds of families from these towns continue to live and work in Napa Valley, contributing greatly to the local economy and its success, while maintaining strong ties to their hometowns. These towns are part of a transnational network that is an important, albeit little-known, aspect of the U.S.-Mexico relationship.”

“The Napa Valley Museum is not the first venue to organize a companion exhibit to enhance a Smithsonian traveling exhibition,” Maria del Carmen Cossu, project director of Latino initiatives at SITES, points out. “Smithsonian traveling exhibitions serve as catalysts for collecting and displaying items that tell local stories related to the exhibitions’ themes. Most host venues add objects from their own collections to make connections with the local community’s history and heritage.” 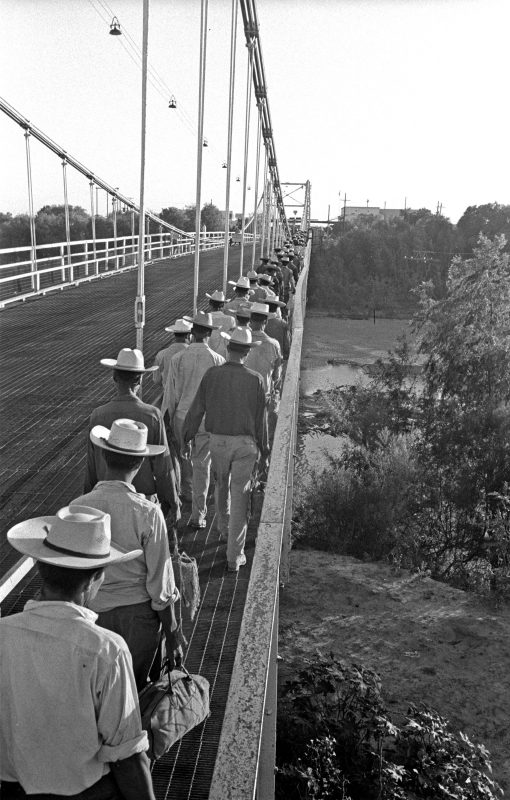 Braceros cross the border in Hidalgo, Texas. Crossing the border was a major hurdle in the journey north. Braceros were often subjected to humiliating exams and bureaucratic procedures along the journey. Photo by Leonard Nadel, 1956. (Courtesy of the Smithsonian’s National Museum of American History)

In many of the cities it has visited, “Bittersweet Harvest” has been the first English-Spanish bilingual exhibition, leading to increased visitation by members of local Latino communities.

“‘Bittersweet Harvest’ has been a wonderful example of community and venue engagement,” Cossu continues. “Last year, the Emma Barrientos Mexican American Cultural Center of the Austin Parks and Recreation system engaged its Texas community in creating a complementary exhibition ‘Taking to the Road: The Austin Migrant Farmworkers Connection.’ They also organized a summer camp for teens that used ‘Bittersweet Harvest’ as context to discuss issues of civil rights and social justice.”

Local engagement sparked by the center has inspired similar efforts at subsequent hosting venues, including the Holocaust Museum in Houston and the Napa Valley Museum.

On view at the Napa Valley Museum through Nov. 12, “Bittersweet Harvest” has a simultaneous showing in Charlotte, N.C. at the University of North Carolina’s J. Murrey Atkins Library.