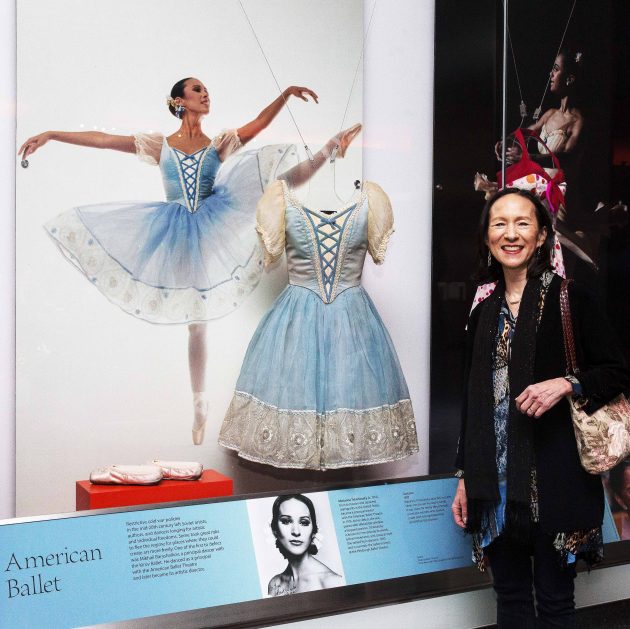 On Saturday, April 1, 2017, ballerina Marianna Tcherkassky visited the “American Ballet,” exhibit at the Smithsonian’s National Museum of Natural History, in which her ballet dress and shoes are on display. (Photo by Jaclyn Nash)

If this was merely a story about the beauty of the dance costumes featured in the American Ballet display on the first floor of the Smithsonian’s National Museum of American History, this story might spotlight the delicate fabrics and elegant lines of each piece suspended inside the display case.

But, like any story about Smithsonian-curated artifacts, this narrative runs far deeper than the elaborate stitching of the sky blue peasant dress that Marianna Tcherkassky wore as the lead in Giselle in 1977. It is bigger than the sparkling, stacked heels and polka-dotted halter dress Misty Copeland wore throughout her two-week, 2015 Broadway debut in On the Town, or the flowing, rose-colored gown, and satin pointe shoes that Violette Verdy wore when she danced at a 1976 White House State Dinner. 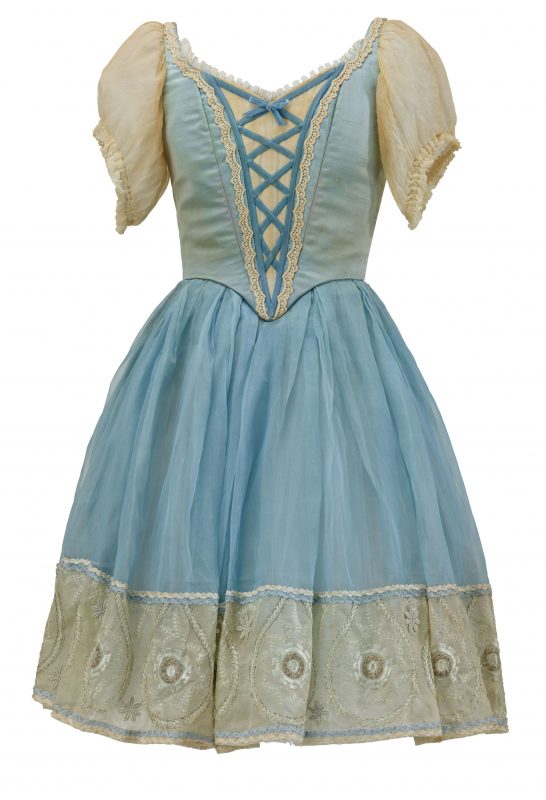 Marianna Tcherkassky wore this costume when she danced the lead in Giselle. It was made for her by May Ishimoto, a costume mistress who worked under both George Balanchine and Mikhail Baryshnikov.

Sitting down with Associate Curator Melodie Sweeney, it becomes apparent this is a story with a common thread of passion and perseverance, long-sought dreams and unexpected detours, old traditions, and new horizons—both for the craft and its diverse cast of characters.

“There are people behind every object,” explains Sweeney, a 39-year veteran of the museum, and a former dancer. “This display is a very American story in that we [Americans] basically started our own form of ballet that has more motion, more movement, more expression [than traditional classical ballet]. And I think all three of these dancers account for that.” 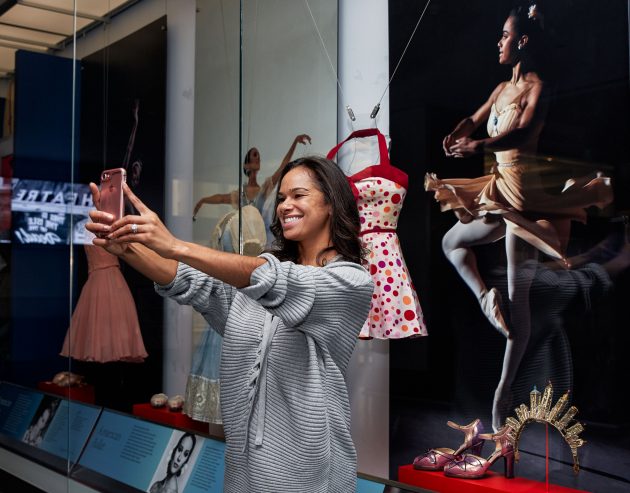 In January, Misty Copeland visited the National Museum of American History and took a selfie with her ballet dress in the exhibit “American Ballet.” (Photo by Hugh Talman) 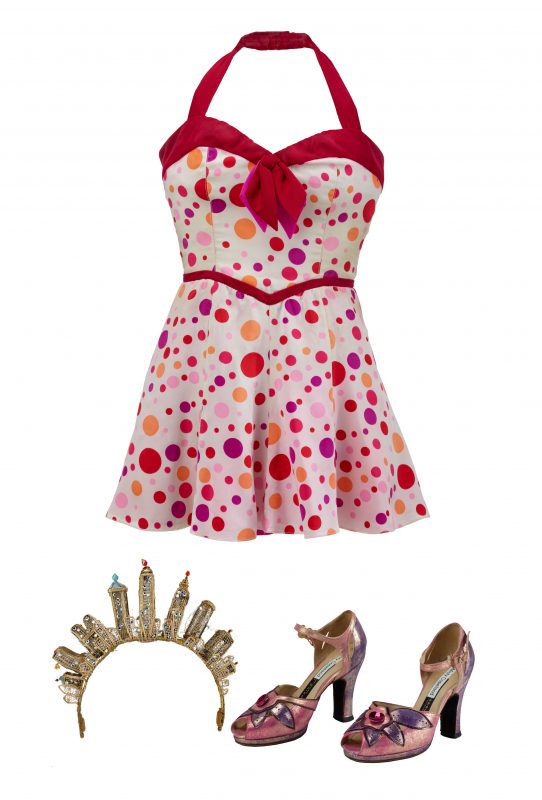 Misty Copeland wore this costume for her Broadway debut in “On the Town,” an ensemble created by Foresight Theatrical. The musical is based on the 1944 ballet “Fancy Free.”

Through the exhibit, Sweeney sought to convey how ballet has progressed through the years to reach a wider audience. “These are the people who came from different places, so ballet is not this closed art form that some people might assume,” she says.  “Especially with Misty [Copeland], ballet is becoming more popular, especially with young children, and they’re not all white.  That’s the greatest thing.  She’s bringing ballet to kids who would never have had the chance to do anything like this before, and they’re loving it.”

The story that first inspired Sweeney to create the collection and suggest the exhibit was one waiting to be told through the blue Giselle dress gifted by Marianna Tcherkassky. It was created by renowned seamstress May Ishimoto, a figure whose story could command her own exhibit one day. Sweeney hopes to share more of Ishimoto’s story in the future through an online exhibit. 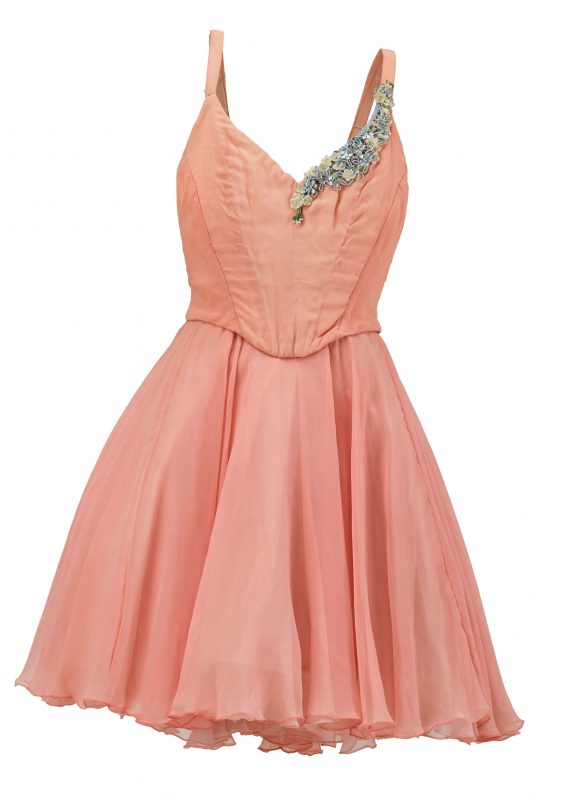 Violette Verdy wore this costume when she performed at a White House state dinner. It was made expressly for Verdy by Barbara Karinska, a former costumer for the Ballet Russes.

As Sweeney explains, Ishimoto, who died in 2009, was a self-taught dressmaker. As a teenager, she longed to one day sew costumes “for Hollywood,” so at a young age, she studied dressmaking in California. Months after the Japanese attacked Pearl Harbor, Ishimoto, at 23 years old, was sent with her family to an Arkansas incarceration camp for Japanese Americans. Her mother died there and she met and married her husband in the camp. Upon release from the camp in 1945, they moved to the Washington, D.C., area and started a family.

When her daughter took ballet classes, Ishimoto sewed the costumes. Soon, word of her talent spread to renowned ballet companies, which led to a long career tailoring elaborate pieces for a host of ballet greats such as Rudolf Nureyev, Margot Fonteyn, George Balanchine and Mikhail Baryshnikov. Many of May Ishimoto’s possessions, including sewing tools, detailed dressmaking notes and decorative pins that Ishimoto’s husband carved for her at the internment camp, were collected by Sweeny for the American History Museum’s Culture and Arts Division, as well as for collections related to military history. 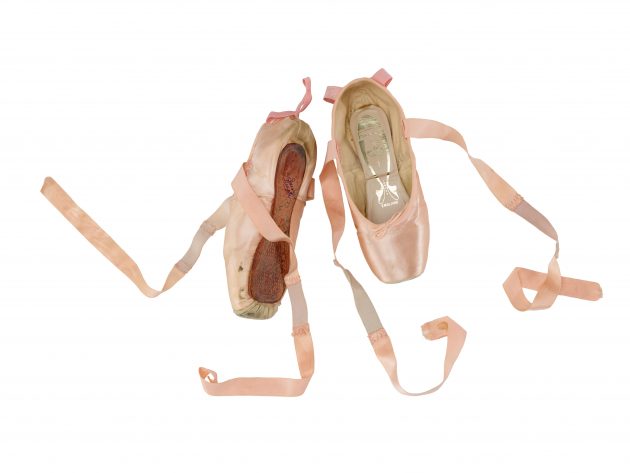 Violette Verdy wore these ballet shoes as she performed at a White House state dinner. (Photo by Hugh Talman)

The American Ballet display will be showcased until mid-May 2017 and is part of a series of teasers for a major upcoming entertainment exhibit, planned for 2019.