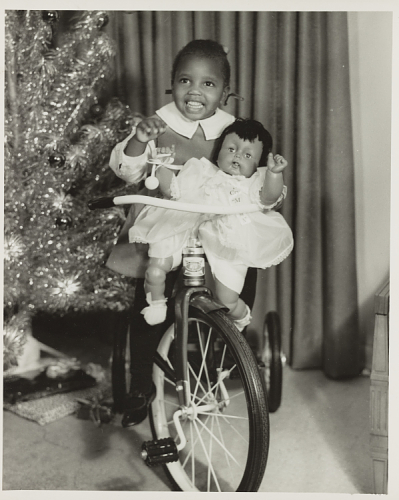 This portrait of a young girl enjoying Christmas in Greenville, Miss., was taken by Henry Clay Anderson (1911- 1998) and is one of thousands of images by Anderson in the photography collections of the Smithsonian’s National Museum of African American History and Culture. Anderson’s postwar pictures of everyday life in the segregated black community in Greenville, taken from the 1940s through the 1970s, document a wide range of community subjects such as weddings, funerals, formal dances, families, soldiers, high-school portraits, sports events, working professionals, nightclub entertainers, parades and Civil Rights gatherings.

In 2007, Shawn Wilson and Charles Schwartz published Separate But Equal: The Mississippi Photographs of Henry Clay Anderson, a book that highlighted Anderson’s work and unveiled his remarkable perspective into African-American life. An exhibit of Anderson’s photographs in New York City that same year portrayed his photographs as documenting “a virtually ignored chapter in African-American history, that of the proud, dignified community of middle-class African-Americans that existed throughout the South during the Civil Rights Movement. They intimately portray a community of black Southerners who considered themselves first-class citizens despite living in a deeply hostile America.”

Click this link to view the nearly 5,000 images by Anderson in the collections of the National Museum of African American History and Culture.