Is Earthly Life Premature From a Cosmic Perspective? 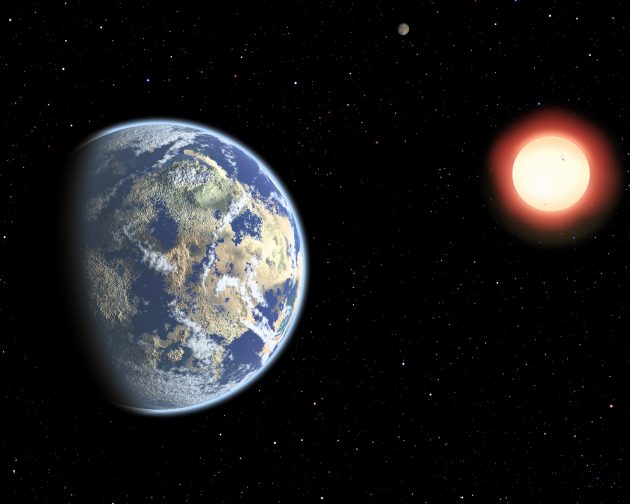 This artist’s conception shows a red dwarf star orbited by a pair of habitable planets. Because red dwarf stars live so long, the probability of cosmic life grows over time. As a result, Earthly life might be considered “premature.” (Image by Christine Pulliam/CfA)

The universe is 13.8 billion years old, while our planet formed just 4.5 billion years ago. Some scientists think this time gap means that life on other planets could be billions of years older than ours. However, new theoretical work suggests that present-day life is actually premature from a cosmic perspective.

“If you ask, ‘When is life most likely to emerge?’ you might naively say, ‘Now,'” says lead author Avi Loeb of the Harvard-Smithsonian Center for Astrophysics. “But we find that the chance of life grows much higher in the distant future.”

Life as we know it first became possible about 30 million years after the Big Bang, when the first stars seeded the cosmos with the necessary elements like carbon and oxygen. Life will end 10 trillion years from now when the last stars fade away and die. Loeb and his colleagues considered the relative likelihood of life between those two boundaries.

The dominant factor proved to be the lifetimes of stars. The higher a star’s mass, the shorter its lifetime. Stars larger than about three times the sun?s mass will expire before life has a chance to evolve.

Conversely, the smallest stars weigh less than 10 percent as much as the Sun. They will glow for 10 trillion years, giving life ample time to emerge on any planets they host. As a result, the probability of life grows over time. In fact, chances of life are 1000 times higher in the distant future than now.

“So then you may ask, why aren’t we living in the future next to a low-mass star?” says Loeb.

Although low-mass, red dwarf stars live for a long time, they also pose unique threats. In their youth they emit strong flares and ultraviolet radiation that could strip the atmosphere from any rocky world in the habitable zone.

To determine which possibility is correct — our premature existence or the hazard of low-mass stars — Loeb recommends studying nearby red dwarf stars and their planets for signs of habitability. Future space missions like the Transiting Exoplanet Survey Satellite and James Webb Space Telescope should help to answer these questions.

The paper describing this work has been accepted for publication in the Journal of Cosmology and Astroparticle Physics and is available online. Its co-authors are Avi Loeb (Harvard-Smithsonian Center for Astrophysics) and Rafael Batista and David Sloan (University of Oxford). Loeb simultaneously wrote an extended review on the habitability of the universe as a chapter for a forthcoming book.