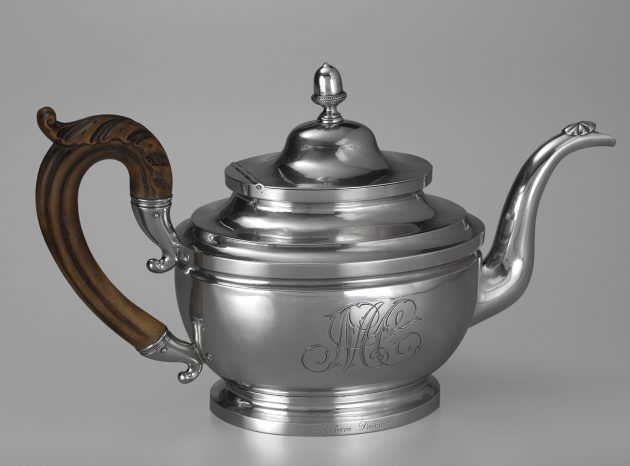 Teapot made by Peter Bentzon, ca. 1817-1829, silver and wood, made in Philadelphia, Collection of the Smithsonian’s National Museum of African American History and Culture. The silver teapot has an oval vase-shape on a spreading pedestal foot, with curved spout capped by an incised patera and wooden leaf-capped scroll handle, and hinged domed cover with acorn finial.

A silver-and-wood teapot crafted by African American master silversmith Peter Bentzon in Philadelphia between 1817 and 1829 is one of the prized objects in the collection of the Smithsonian’s National Museum of African American History and Culture. Today is special however for this teapot as images and information revealing its remarkable craftsmanship become accessible to the world online for the very first time. It is the 1 millionth object from the Smithsonian’s collections to be digitized by the Smithsonian’s Mass Digitization Program.

Q: What do you mean when you say something has been digitized?

Rahaim: We’re creating digital surrogates, taking photographs of museum objects. Some of them have just one view and some have up to seven views. For example, we photograph both flat and non-flat objects, so flat stuff obviously when there’s just one side we’re just going to take one shot of it. Sometimes it’s the front and back so there are two views of that object. But for non-flat objects we take the cardinal viewpoints—front, back, left, right—and  then we do an overhead shot, and then we two more oblique shots from the front right quarter view and the back left quarter view.

But we’re not just taking pictures, digitization is a comprehensive process that includes synchronizing the object to its actual collection record in the Smithsonian computer system…and that all happens automatically now… and then pushing it out into the collections search database where the object image and its collection information is available to the public. We have a saying “from the shelf to public access in 24 hours or less.” Our record is  hours from pulling an object from the shelf and it being available to the public. We’ve introduced an immense amount of automation into our process that makes it very fast.

Q: The Smithsonian has 154 million objects… are you concentrating in any specific area?

Rahaim: We go back and forth between art, history & culture collections and science. To that end the science collections (The National Museum of Natural History alone has 136 million scientific specimens) are much bigger, so by proportion we’re always going to end up doing more in the science museums.

One of our biggest accomplishments so far has been completing the digitization of all of the Cooper Hewitt, Smithsonian National Design Museum’s objects. There are 211,000 objects and we didn’t do every single one, some had conservation needs, but we did about 90 percent—190,000. We digitized things as small as buttons and as large as couches. Our biggest challenge was being able to set-up enough digitization studios to handle the number and variety of objects.

We did that all in about 18 months. We started in November 2014 and are just finishing up now. These are big efforts. That was about 10,000 objects a month. We worked with a Cooper-Hewitt team that ranged from 8 to 16 people.

Q: Where is your current focus?

Rahaim: We’ve done a few science collections but the Botany Collections at the Natural History Museum is really our first serious one. Botany has 3.5 million botanical samples and we’ve done half-a-million of them since October 2015. These are herbarium specimens that are attached to a sheet of paper and are one sided. We set-up a conveyor-belt system that runs about 3,000 to 4,000 herbarium images a day and about 75,000 images a month.

Other projects we have done include the numismatics collection at the National Museum of American History, the bumble bee collection in the Natural History Museum’s Entomology Department, pottery at the Freer Gallery of Art, a collection of aircraft instruments at the National Air and Space Museum, a collection of cover artwork from Folkways Recordings for the Center for Folklife Programs, a collection of stamps and postal objects from Israel and Palestine for the National Postal Museum and 4,600 black-and-white glass negatives and glass lantern slides dating 1900-1966 for Smithsonian Gardens.

To look at it another way, we’ve done a million objects since late 2013 and we’re just getting started!

Q: Do you follow the demand for the digital images once you get them online?

Rahaim: Yes, to a degree. I don’t know the exact numbers but Cooper Hewitt has told us there has been a huge spike in terms of access to their online collections. For Botany it is still too soon to tell. We know of one other herbarium in the world that has digitized their collections—the Naturalis Museum in Holland—and they showed a huge increase in access and demand after they went completely live.

With 1 million objects completed we’re pretty happy but we realize we’re also just getting started…we’ve got a lot to do.