Disabilities and the Workforce: Commemorating the 25th Anniversary of the ADA 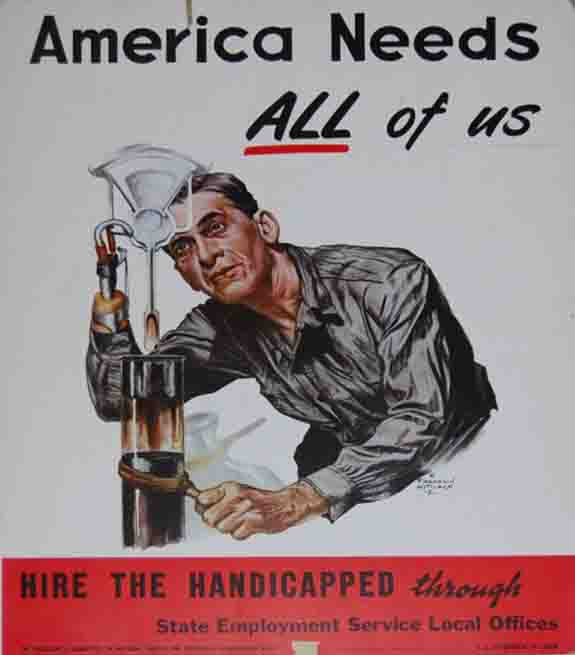 Throughout American history, people with disabilities have faced difficulties in getting work skills and finding jobs. In the late 1800s and early 1900s, many could only find work that exploited their physical differences in the “freak shows” and circuses that were popular at the time.

In 1945, President Harry S. Truman designated the week of Oct. 7–13 as National Employ the Physically Handicapped Week to encourage employing people with disabilities. This 1951 poster featuring a man with a split-hook hand working on a hydraulic gauge under the title “America Needs ALL of Us” was used to promote the effort.

In the 1970s, the Disability Rights Movement began to spur social change, resulting in the Rehabilitation Act of 1973, which guaranteed equal opportunities to people with disabilities and committed the federal government to affirmative actions on their behalf.

On July 26, 1990, President George H.W. Bush signed the Americans with Disabilities Act (ADA), one of the most significant civil rights documents in American history. Its purpose was to end discrimination, reduce barriers to employment and ensure access for people with disabilities.

To learn more about the stories and events related to people with disabilities, visit the online exhibition “EveryBody: An Artifact History of Disability in America” at the Smithsonian’s National Museum of American History website.