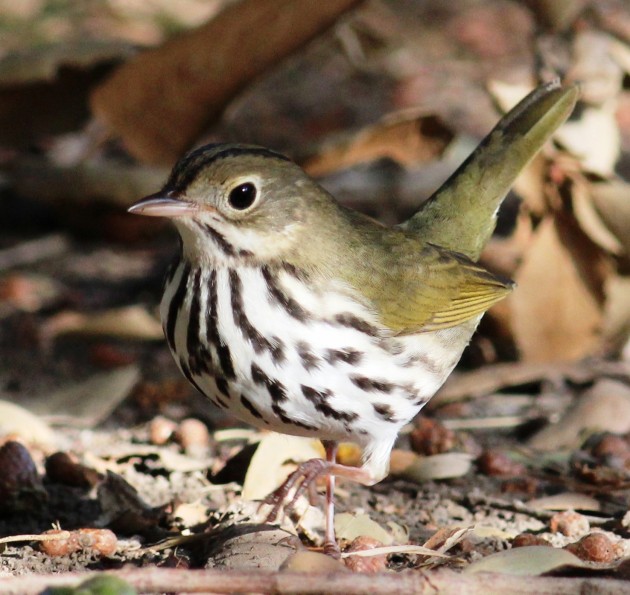 SCBI scientists have studied migration patterns of birds for decades. However, their studies are often hampered by their equipment: tracking tags were often too large for small birds, and too unwieldy, expensive or unreliable.

SCBI scientists Michael Hallworth and Peter Marra, reporting in Scientific Reports, have now tested a new pinpoint GPS tag device that tracks migratory birds more reliably than ever before. The miniaturized pinpoint GPS tags give the birds’ location with extraordinary accuracy: within about 10 meters (33 feet), rather than 150 to 200 kilometers (93-124 miles) from light-level geolocators.

The device is a tiny backpack, sized for a small bird and encased in durable plastic. It turns itself on for 70 seconds eight to 10 times a year, recording the location of the bird each time by connecting with GPS satellites. The pinpoint GPS tags are an order of magnitude smaller than previous GPS devices and offer dramatically improved resolution over similarly sized tracking devices. The newly developed tracker weighs about a gram (0.04 ounces) and can be carried by small songbirds weighing about 20 grams (0.7 ounces.). Until now, the smallest comparable device with similar accuracy weighed about 12 grams (0.4 ounces) and could only be carried by animals weighing at least 250 grams (9 ounces).

“Tracking an animal this small, with a device of this size, and with this degree of precision has never been done,” said Marra, head of the Migratory Bird Center. “Now we can identify the exact territories these birds occupied on their tropical wintering grounds. Miniaturizing technology so we can track animals throughout their annual cycle is an essential ingredient of effective conservation.”

The team chose ovenbirds as a test species because they faithfully move between the same breeding and non-breeding sites every year. At 20 grams, ovenbirds were an ideal size for testing. The team tested the GPS tags and compared the behavior of birds with and without the devices and confirmed that the devices did not affect the birds in any way.

While researchers know the general winter range of ovenbirds, from the northern United States and Canada for breeding to Mexico and Central America and the Caribbean during the non-breeding season, no one has had the technology to precisely pinpoint individual breeding and winter territories. Marra and Hallworth tagged ovenbirds from both Maryland and New Hampshire in June 2013 and recaptured them in April and May 2014 to download the GPS data. They found that the non-breeding locations of birds breeding in Maryland and New Hampshire were non-overlapping during the temperate winter. Maryland ovenbirds had winter territories in Florida and Cuba, while the ovenbirds breeding in New Hampshire occupied winter territories primarily in the Dominican Republic.

Identifying and understanding the migratory connectivity of birds throughout an entire annual cycle, including how birds use their environment and how events occurring during these different stages of the annual cycle interact, are critical to understanding animals’ biology and ecology and allows data to more strategically and effectively inform conservation efforts.