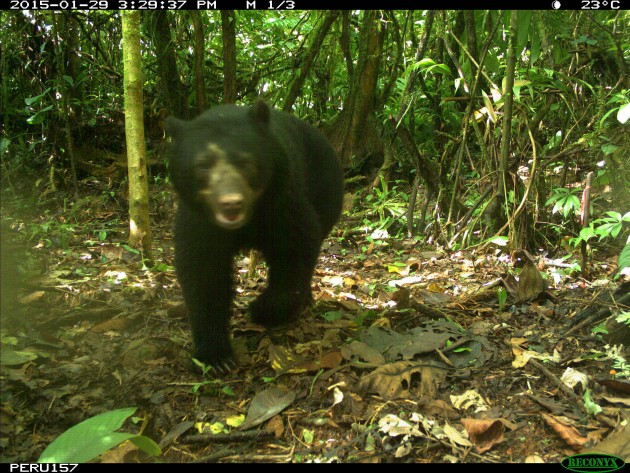 For the first time, a team from the Smithsonian Conservation Biology Institute’s (SCBI) Center for Conservation Education and Sustainability collected photo evidence of an Andean bear (also known as the spectacled bear) in Peru’s Amarakaeri Comunal Reserve using camera traps—automated cameras with motion sensors. Three camera trapping locations within the Reserve documented the species between late February and early March 2015. The data collected from these cameras will help the Amarakaeri Comunal Reserve protect this culturally and ecologically important species. Andean bears are listed as vulnerable on the International Union for Conservation of Nature‘s Red List of Threatened Species. It is estimated that there are only 20,000 left in the wild due to threats including hunting and habitat loss from deforestation, mining, and road construction.

The team, including Tremaine Gregory and Hadrien Vanthomme from SCBI, Alejandro Portillo from the Universidad de Cusco, Peru, and Alcides Fernandez, from the local Yine community of Diamante, is conducting studies in the Southern Peruvian Amazon to understand changes in the distribution of large mammals over the course of the construction of a natural gas well. Since June 2014, researchers have recorded more than 25 mammals in the Reserve using camera traps.