Before iPhones and laptops there were human computers, some of whom worked at the Harvard College Observatory. Women like Henrietta Swan Leavitt, Williamina Fleming, and Annie Jump Cannon made some of the most important discoveries in astronomy in the early 20th century. Their work was even featured in the TV series Cosmos, hosted by Neil deGrasse Tyson. Now, Harvard is seeking your help to transcribe the logbooks that record the century-long observations behind (and beyond) their discoveries. 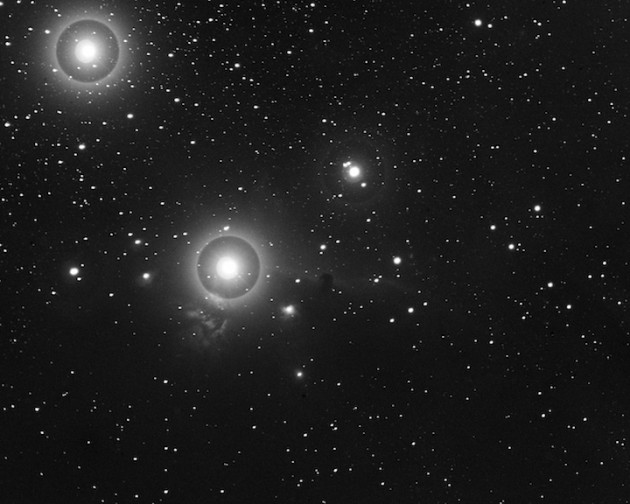 The Horsehead Nebula was discovered on this photographic plate in 1888. It is the dark smudge near the center of the image. The three brightest stars in the field are overexposed, creating the surrounding rings and other image artifacts.
(Harvard College Observatory)

“Digitizing the ~500,000 glass plate images covering the full sky will foster new scientific discoveries for the currently ‘hot’ field of studying variability of astronomical objects, or Time Domain Astronomy, as we bring to light these long-hidden archives,” says Harvard professor Josh Grindlay, the leader of the Digital Access to a Sky Century at Harvard (DASCH) project.

The telescope logbooks record vital information associated with a 100-year-long effort to record images of the sky. By transcribing logbook text to put those historical observations in context, volunteers can help to unlock hidden discoveries.

To participate in this new “citizen scientist” initiative, interested parties are invited to sign up at https://transcription.si.edu/browse?filter=owner:11

We need to transcribe more than 100 logbooks containing about 10,000 pages of text. We seek volunteers to type in a few numbers per line of text onto web-based forms, since optical character recognition (OCR) doesn’t work on these hand-written entries. Harvard is partnering with the Smithsonian Transcription Center to recruit Digital Volunteers. This effort is part of a larger Smithsonian-wide initiative that was publicly launched last month. By transcribing historic documents and collection records, the resources of the Smithsonian and its partners are being brought to a new, global audience via the web.

“By simply typing in selected parts of the logbook entries for each plate, the public can partner with us as we make new discoveries while preserving the past,” explains Harvard Curatorial Assistant David Sliski, who led the effort to make this transcription project possible.

A Century of Sky Observations

Between 1885 and 1992, the Harvard College Observatory (now part of the Harvard-Smithsonian Center for Astrophysics) repeatedly photographed the night sky with telescopes in both the northern and southern hemispheres. As a result the Observatory’s archives hold more than 500,000 glass photographic plates (each 8 by 10 inches), nearly three times as many as the next largest collection in the world.

The DASCH project is conserving the plates by digitizing them on a high-speed scanner (up to 400 plates per day) and measuring the position and brightness of every star or distinct object on each plate. To put the mountains of data in context, each plate scan must be linked to the logbook “metadata” – handwritten entries recording details like the date, time, exposure length, and location on the sky.

The logbook data is required because it is the only record of the date and time for each exposure, which is essential to measure how the brightness and position of each object on each plate changes with time. Without these transcriptions the DASCH project would not be possible.

From just the early phase of “production scanning,” Harvard-Smithsonian scientists have found unexpected phenomena. For example, one rare class of object is a star paired with a black hole, which flares in brightness for a month every 50-100 years. Before DASCH, only two historical outbursts from such star-black hole pairs were known. In the past two years, with fewer than 10 percent of the plates having been digitized, DASCH has found three more. By measuring their historical outbursts and recurrence times, astronomers can deduce how many such systems remain hidden in our Galaxy.

The DASCH project website is http://dasch.rc.fas.harvard.edu. DASCH is supported by grants from the National Science Foundation.