Einstein’s Theory of General Relativity predicts that accelerated masses emit gravitational waves, or ripples in space-time. Even though gravitational waves have yet to be detected directly, we expect that there are more than hundred million gravitational wave sources in our own galaxy. However, as of today, we know of only a few such sources. 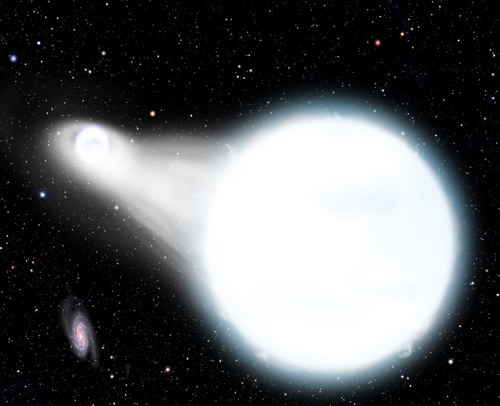 Artist’s rendition of the future evolution of the WD 0931+444 system. (Image by David Aguilar)

A team of researchers, led by Dr. Mukremin Kilic of the University of Oklahoma and Dr. Warren Brown of the Smithsonian Astrophysical Observatory, have recently identified one of the best (and perhaps the most powerful) gravitational wave sources currently known using the Gemini Multi-Object Spectrograph (GMOS) on the Gemini North telescope and the Blue Channel spectrograph on the 6.5-meter MMT Telescope. Known as WD 0931+444, the object was first identified in 1982, and classified as a white dwarf with a low-mass M-dwarf stellar companion.

This new data from Gemini and MMT reveal that the white dwarf in this system is not in a binary with the M dwarf. Instead, it is orbiting another invisible white dwarf every 20 minutes. Thanks to the large collecting area of the Gemini and MMT telescopes, the team was able to obtain high quality optical spectroscopy of this system every 2 minutes and resolve the 20 minute orbital period.

The orbital separation of the two stars is only 20 percent of the size of the Sun. These two stars will lose angular momentum through gravitational wave radiation and merge in less than nine Million years. Depending on the inclination angle (which is currently unknown) the pair may merge even faster, in only a few million years. This previously unknown source is believed to be stretching everything around us (due to gravity waves) by a factor of 10-22 (or more) every 10 minutes!

The discovery of the true nature of WD 0931+444 indicates that there are likely many other strong gravitational wave sources hiding in plain sight. Some of these hidden sources can be identified through further optical follow-up observations as in this work. However, the direct detection of gravitational waves from these sources has to wait for a space-based gravitational wave mission like the evolved Laser Interferometer Space Antenna, which will likely not be operational until 2034 as currently envisioned.”